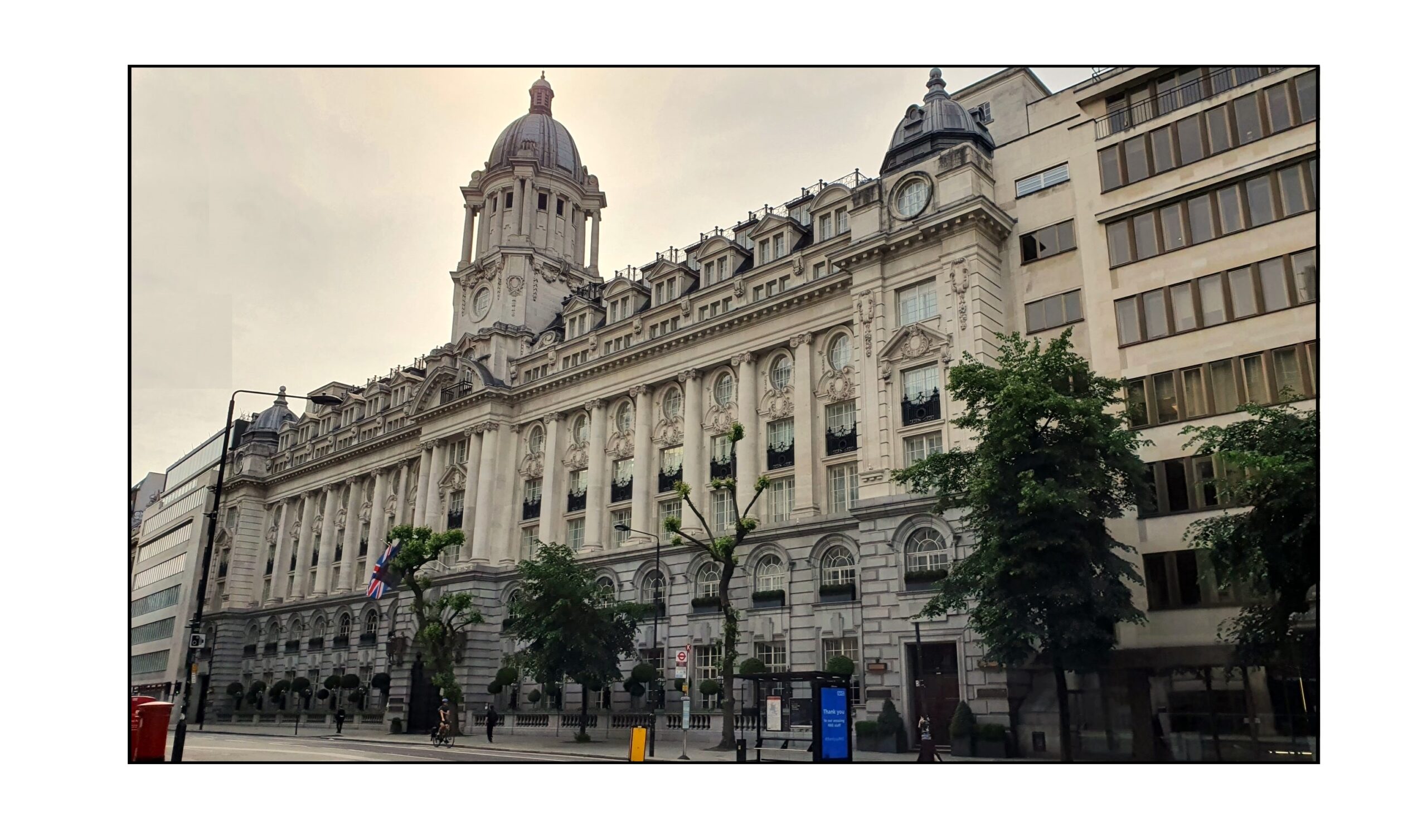 When I was a young graduate, I took a job as a trainee actuary at Pearl Assurance. The work turned out to be extremely boring and I rapidly lost interest. Fortunately, this post is not about actuarial theory but the first Pearl building in which I worked.

I started at the Pearl HQ just as activity began to wind down prior to the company’s relocation. It was a remarkable place: It still had a full-time butler, french polisher and lift lady who spent the entire day pressing buttons; staff got morning coffee and afternoon tea from large urns arriving at strictly regulated times in each department, and the mahogany-paneled directors’ corridor that ran the full length of the building at 1st floor level was forbidden territory. There were three separate dining rooms with the most senior having waitress service. The huge marble-columned eastern cash hall was designed to assure policyholders arriving to pay their penny premium that their money was safe with Pearl. 252 High Holborn was a glorious throwback to the Belle Époque era in which it was built.

Except that most of it wasn’t Belle Époque at all. Indeed, the last part of that massive High Holborn bulk was only finished in 1962. Why so? Allow me to explain.

In 1911, Pearl was looking to build a new HQ to replace Adelaide House in the City (see my Old London Bridge post), on which the lease was set to expire. The company commissioned architect H. Percy Monckton (1857-1930), who designed a building with a 400 ft facade of granite and Portland stone in a conservative Edwardian style. Work began in 1912 on a site just west of the City boundary. Pearl had acquired all the land necessary for the entire 400 ft, but either didn’t have the money or the need to build so much office space immediately. So, when the new building opened in 1914, it represented only about 35% of Monckton’s design.

← A painting of the area immediately prior to the 1912 development by Pearl Assurance. Note the Holborn Empire to the right – a historic theatre with an auditorium itself rebuilt in 1912, to the designs of Frank Matcham.

→ Even allowing for the distorted perspective of this picture, the 1914 structure looks lopsided and overbearing. This initial phase contained the grand staircase and the small western cash hall. Note the tower clock, soon replaced by a window.

The surviving Victorian building just visible to the right is labelled in the painting above as W. Avis & Sons, selling new and secondhand home and office furniture. I wonder if they got the Pearl gig next door.

Pearl was expanding rapidly, and a further building programme commenced in the 1930s as war clouds gathered again. This phase completed the eastern range, which contained the massive eastern cash hall, and left the facade looking considerably more coherent – but still only 75% complete, 25 years after work began. The south-east wing behind, which would complete the enclosing of the courtyard, also remained unbuilt.

← The facade cleverly depicted by the company stationary department in the 1939 calendar. The illustration appears to have been ‘cropped’ on the right for artistic purposes, but in reality this shows the building in its entirety.

252 High Holborn survived the Second World War unscathed. Not so the neighbouring Empire; the auditorium was destroyed in 1941. There was initially some hope of rebuilding, but in retrospect this was hopelessly optimistic, and Pearl soon cast its eyes on the derelict site. The company’s priority, however, was probably to maximise office space at minimal cost, so the first post-war addition was the easily constructed 1956 south-east courtyard wing. Then, in 1960, the last Victorian structures impeding the completion of the facade came down, along with the adjoining Empire. The heavy 1912 design, by this time half a century old and completely outdated, was finally finished just as the sixties began to swing. At the same time, the restrained frontage of Weston House was built on the Empire site. Weston House and the western end of 252 High Holborn seem so well-connected physically, despite being in completely different styles, precisely because they were constructed as a single development.

In due course, Pearl relocated to Peterborough (the actuaries went to Moorgate in the City, much to my relief) and the name has since disappeared after mergers and rebrandings. The empty building was used as a film location for episodes of ‘Poirot’, and was eventually converted into a luxury hotel. The principal facades, East and West Banking Hall interiors, the seven story marble Grand Staircase and the carriageway entrance leading into a sprawling courtyard have all been restored, and everywhere you look there is marble and mahogany. Most of it just isn’t quite as old as the guests may think.

← The balustraded grand staircase in Italian green-veined marble as it is today, a feature noted in the Historic England Listing. The listing describes the building as being in Edwardian Baroque style.

→ The one thing missing from 252 High Holborn is the memorial by Sir George Frampton RA, dedicated to Pearl staff who lost their lives in the two world wars. This stood in the centre of the courtyard, but was relocated with the company, and is now marooned on Lynch Wood business park with which Pearl’s successor company, Phoenix Group Holdings, has only a limited connection.