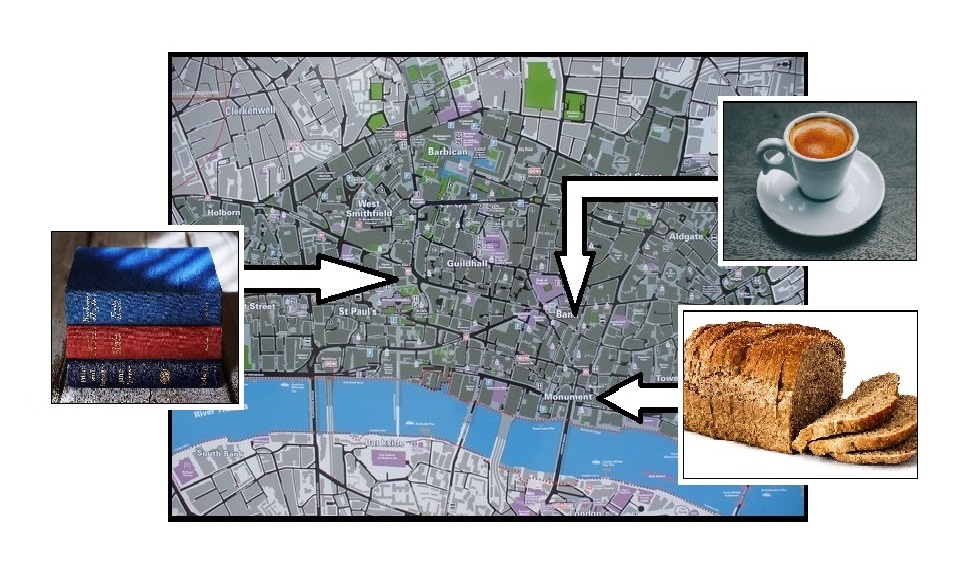 I’m not usually one to offer business advice. However, during my recent City wanderings I’ve identified certain niche trading opportunities just waiting to be exploited. Not in foreign exchange, futures or derivatives (whatever they are), dear me no. Rather, they utilise the Square Mile’s colourful history just as it tries to attract more tourists post-Covid to offset the inevitable decline in office workers. So, with tongue-partially-in-cheek, here are my top three business tips for 2021.

1. Put some buns in the oven

Pudding Lane is a dour, grey street in the east of the City close to London Bridge. The only retail outlets here are a sushi place and a small Lebanese restaurant. It has nothing to appeal to anyone – save Japanese and Levantine cuisine enthusiasts, obviously – and thus leaves a lot of visitors deeply disappointed, many of them children and only a few of them pyromaniacs. The office blocks that greet them are triumphs of late 20th century mediocrity that can be improved only by getting up-close-and-personal with a wrecking ball.

← I couldn’t have made it more dourly grey-brown if I’d tried. However, this is not Pudding Lane at its worst. First mentioned in 1360, ‘pudding’ refers to entrails sent down the lane to dung boats on the Thames after animals had been ‘processed’ in the butchers’ scalding house at the north end.

In case you haven’t already guessed, my proposal is for a new bakery. Okay, I admit that on a single occasion 350 years ago, such a proposition ended quite badly, but the City of London now has a fire station. It’s called Dowgate and is, typically for the City, not in Dowgate but is near Pudding Lane. Also located nearby is the Worshipful Company of Bakers. This might prove advantageous if you need some kneading advice. The white-bakers – that is, bakers of white bread – have been in the area for over half a millennium. There was a bit of a to-do in the 14th century with the brown-bakers, who parted company with the white-bakers and went elsewhere. The two livery companies came together again in 1645 in doughy unity, just in time to rise to the challenge of the tricky PR campaign the profession required in 1666. I’m sure there’s a moral there somewhere.

Nearby tourist attractions likely to bring potential punters to the bakery include the Monument, which is still the tallest isolated column in the world. It commemorates the start of the conflagration, and stands on Fish Street Hill, which was the busy northern approach to London Bridge from Roman times until 1831. There’s some excellent stone carving on the base illustrating the fire and reconstruction and I can assure you that, since 1830, there’s been absolutely no libellous anti-Catholic diatribe included in the inscriptions. Londoners took just 164 years to get over blaming everyone and everything except their own building practices for the devastation wrought by the fire.

→ The Monument on a sunny day. Pudding Lane runs left to right, just beyond the construction site cabins visible behind the base of the column.

Some gift merchandise available alongside the loaves and buns could provide a profitable side-line. T-shirts saying ‘I bought my bread in Pudding Lane’ with humorously singed edges would I’m sure sell like hot cakes. Which reminds me – going by their reputation, it’s probably wise to stock hot cakes.

For publicity, getting one of those novelty insurance policies that nearby Lloyd’s of London sometimes does would be just the ticket. I suggest business liability cover against accidental destruction of two-thirds of the City would fit the bill. You could also announce publicly your intention to change your name to Thomas Farriner. He was the proprietor of the bakery in 1666. At least, he was until 2nd September; after that date his holdings were mainly in ash and charcoal.

2. Serve up something brown and steaming in a back alley

Financially-sophisticated tourists may wonder where Londoners first gathered in an organised fashion to trade and invest, starting the City on the road leading to the modern skyscrapers of Bishopsgate. One location is Change Alley, close to the Royal Exchange and Bank of England. Two of the most famous businesses in the history of money-related stuff were located here.

Garraway’s Coffee House opened in 1669 and became a place of wholesale auctions, including those for spices, coffee, tea, and the Hudson Bay Company’s animal pelts; at the same time brokers used it as a business address. As for refreshments, the London Encyclopaedia claims it was famed for its sandwiches and cherry wine. In the 18th century, Jonathon’s Coffee House became the place where stockbrokers operated – apparently they were too foul-mouthed to be allowed into the Royal Exchange, where merchants gathered. Conditions were cramped, and a curious public gawped at them like they were inmates at a zoo. However, the coffee must have been good as they stayed at Jonathon’s for 80 years, until they moved into a custom-built exchange, the forerunner of the London Stock Exchange, in 1773.

Infamously, both establishments were centres from 1711 of the trade in shares of the South Sea Company – a concern granted a monopoly in slave trading with South America but in reality a vehicle used to lend money to the Government. The particularly unpleasant speculative bubble in the company’s share price burst in 1720, ruining thousands of investors. What is less well known is that the company itself survived until well into the 19th century.

← An 1847 depiction of the chaos in Change Alley at the time of the South Sea Bubble, 1720. Garraway’s appears centre-back. The pawnbroker to the left is doing a roaring trade, while the latest stock news is being read to gullible investors.

← Garraway’s, the building on the left, in the 1740s. The area was laid waste by a devastating fire in 1748, but both coffee houses were rebuilt. Jonathon’s fell victim to fire again in 1778; Garraway’s was finally demolished in 1872.

To this day, Change Alley follows an odd medieval street plan something like a Cross of Lorraine but sadly, as with Pudding Lane, it has little appeal despite the number of tourists it attracts: The office blocks that line it keep their best facades for the more prestigious Cornhill and Lombard Street. The result is a sad little pathway made up entirely of back walls, small windows and service lifts. Myriad drainpipes and white tiling – designed to increase light in such a confined space – strongly suggest a public lavatory for passing giants. A large number of commemorative plaques hint at the area’s past glories, and curious visitors have to make do with photographs of these, going unrefreshed and unrelieved of investable cash at a location once so famous for tea, coffee and financial opportunities.

→ The site of Jonathon’s Coffee House, arguably London’s first stock exchange. The commemorative plaque is almost out of sight, low down to the right of the centre bush. The building is now a discrete City club.

Change Alley is not photogenic. Any image will show a dark and dingy backwater covered in tiles. I’m surprised there aren’t any outsized bright blue toilet blocks on the pavement providing seating. Perhaps a modern street artist will oblige.

← Garraway’s and Jonathon’s helped start us on the road that has led to buildings like 22 Bishopsgate, only 2 minutes’ walk away.

My thinking is that a coffee bar using one of those historic names has serious potential, particularly if it is paired with a share dealing service – perhaps an ‘over the counter’ operation dealing in unlisted start-ups to give punters a taste of that 18th century financial risk. Dress your share dealer in 17th century costume and seat him/her at a wooden table complete with decorative quill pen, in the area punters have to wait for their soy lattes, and you’ll have the perfect tourist-friendly atmosphere and a sure-fire winner. Commemorative reproduction South Sea Company stock certificates could also prove lucrative, and with any luck there’ll be a new bakery in Pudding Lane that could supply you with authentic rolls and pastries. Bubble Tea is, I believe, still quite popular, so a line of ‘South Sea Bubble Teas’ might also prove profitable if enough people understand the pun.

3. Sell two-thirds of the Brontë sisters

Proposing to open a new bookshop is a trickier sell than bakeries or coffee houses. I concede that the days of profitable independent book selling are coming to an end, and the modern Paternoster Row is not the retail hub it was in days of yore. However, there is half a millennium of history waiting to be exploited. The Row was the heart of the book publishing and dealing trade from when Winken de Worde, William Caxton’s appropriately-monikered assistant and successor moved near here in the 15th century, until the Blitz put an end to the entire area in 1940. Today there is not a single bookshop to mark and continue that history.

← Paternoster Row in the Belle Époque. The remnants of another important local trade – drapery – had survived in the shape of Nicholson’s on the left. Samuel Pepys once came to the Row to purchase some green silk for a waistcoat.

Despite the difficulties, I suggest that there is real potential here. The great publishing houses, which shunned the area post-war for the feeble reason that there were no buildings left standing to operate from, probably feel a tad guilty about this and might be persuaded to offer ‘mates rates’ to an independent retailer. With St Paul’s Cathedral just a stone’s throw away, a well-stocked religious department could hit the mark. Also, given the closeness of the site of the offices of John Newbery, the ‘father of children’s literature’, a stock of children’s storybooks may reap dividends. This should appeal particularly to American punters, as Newbery is far more famous and esteemed in the U.S., even having a children’s literature award named after him.

→ Looking at the north side of St Paul’s, from where Canon Alley crosses Paternoster Row. Wren’s masterpiece is a tourist magnet, providing plenty of passing trade.

John Newbery’s offices were located at the end of this alley.

← Paternoster Square has much to attract tourists and office workers alike, providing an even larger potential market.

Books recounting the history of the street are sure to do well, as there are plenty of juicy anecdotes involved Samuel Pepys, Dr. Johnson, two-thirds of the Brontë sisters, Jacobian high society murder-by-poisoned-tart, even saffron-coloured ruffs. This would also suggest a profitable side-line in books by Samuel Pepys, Dr. Johnson and two-thirds of the Brontë sisters. Just don’t invest too heavily in poisoned tarts, saffron-coloured ruffs or green silk waistcoats. The City of London police might have something to say about the first, the fashion police about the others.