The Pick of London Transport 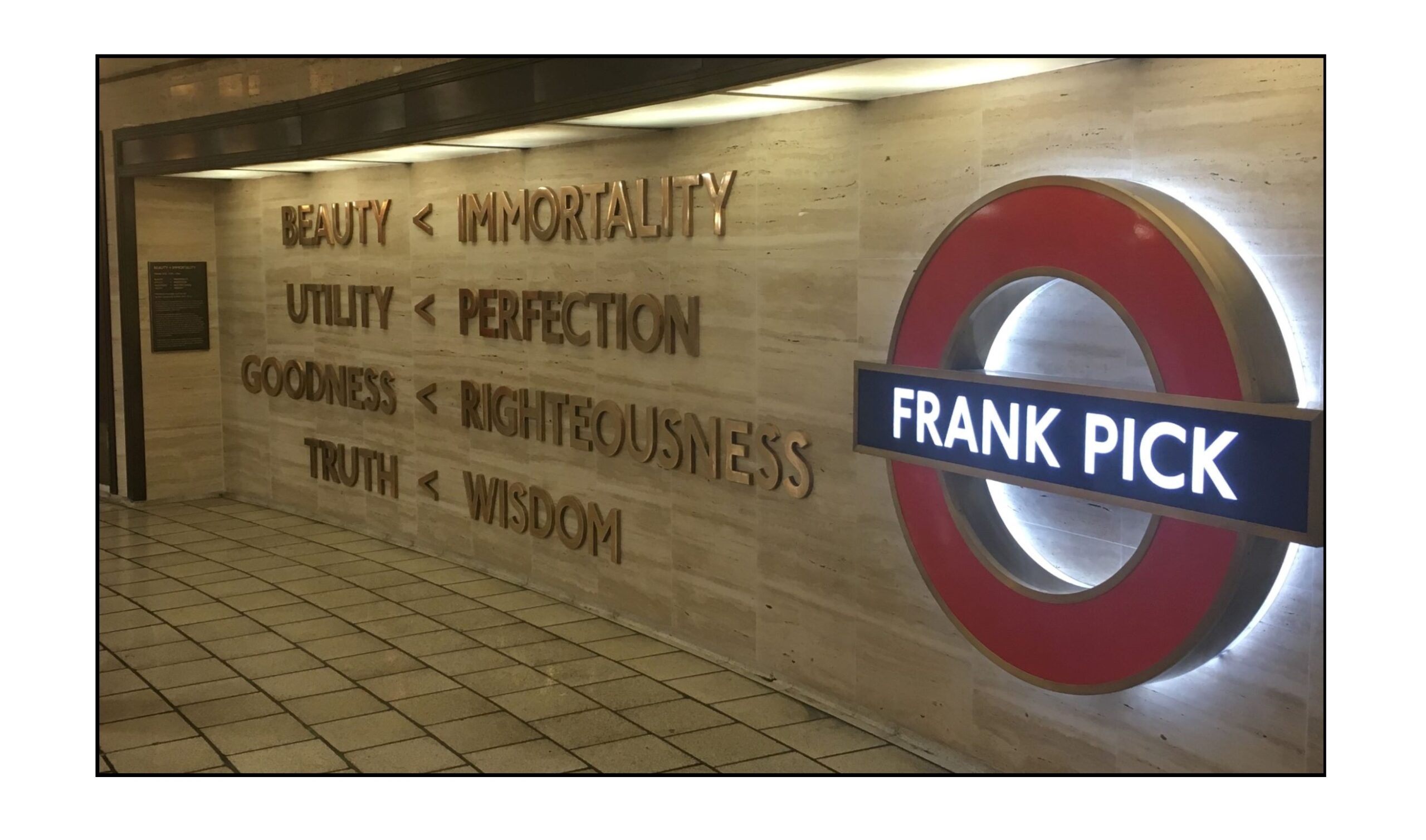 You may rush, walk purposefully, get jostled, stare bewildered, hesitate unsteadily (that’s a Friday night thing), tentatively advance, run, quickly turn around and leave, vomit (Friday night again) but never ‘wander’. This is a shame, because – since November 2016 – there has been a permanent memorial there to Frank Pick (1878-1941) that you’re likely to miss.

I appreciate that you may be asking at this point: ‘Never heard of him. Just who was this Frank Pick guy?’

Well, a big clue lies in the design of the memorial, and its location. Who else could have their name placed within an illuminated London Transport roundel, actually within a London Underground station, than the man responsible for the whole corporate image of London’s transport system?

Okay, so your eyes might glaze over at mention of ‘corporate image’, but bear with me. Pick transformed London Transport into a design-led organisation, commissioning famous designs including the roundel, Art Deco tube stations – including Piccadilly Circus – and the Johnston typeface that is used on so much signage within the transport system. His advertising used new artwork and encouraged the use of public transport, both to visit the centre of London and to consider suburbs newly connected to the tube and bus networks as potential places to live. He made advertising display and tube information display more organised and easily identifiable. But his influence went much further, even to making the bus and tube networks under the control of his employer more integrated. In short, he was a public transport genius.

The brand he created lives on – the (now TfL) roundel must be one of the most recognisable brands in the world – but his use of design and art does too, with the modern Art on the Underground and Poems on the Underground long term campaigns. Look in the shop at the Transport Museum in Covent Garden and you’ll find a myriad of posters reproduced from past advertising campaigns – many from Pick’s time. Clearly, if that arbiter of architectural good taste Nikolaus Pevsner (1902-83) could describe Pick in 1968 as ‘the greatest patron of the arts whom this century has so far produced in England’ then there is something more than just corporate image development going on here.

The memorial artwork on the wall of Piccadilly station, officially called ‘Beauty < Immortality’ and designed by Langlands and Bell, is bright, cheerful, and fully in keeping with the aims of Pick. According to the London Transport Museum, it symbolises Pick’s mentality that the quality of our surroundings contributes to our quality of life. It uses the same materials employed within the station decorative scheme such as bronze, marble and enamel, and it was unveiled on the 75th anniversary of Pick’s death. I like it.

Pick is also commemorated by a blue plaque on his home in Golders Green, north London. It states, with necessary blue plaque brevity, that he was ‘a pioneer of good design for London Transport’. I would go much further. I have previously written a post about the Transport Museum Depot at Acton Town; go there, see the fantastic things they have there, and borrow for a moment the epitaph Sir Christopher Wren’s son wrote for his father in St. Paul’s cathedral: “If you seek his monument, look around you”.

PS: Piccadilly Circus tube station concourse was rebuilt in the art deco style in 1927-9 to cope with increased passenger traffic, and restored in 1989. Areas usually off-limits, and mainly concerned with the 1927 rebuild, are included in one of the Hidden London tours run by Transport for London.

Nearest station: I don’t think you need any help with that on this occasion