The Everyday Story of a City Wharf 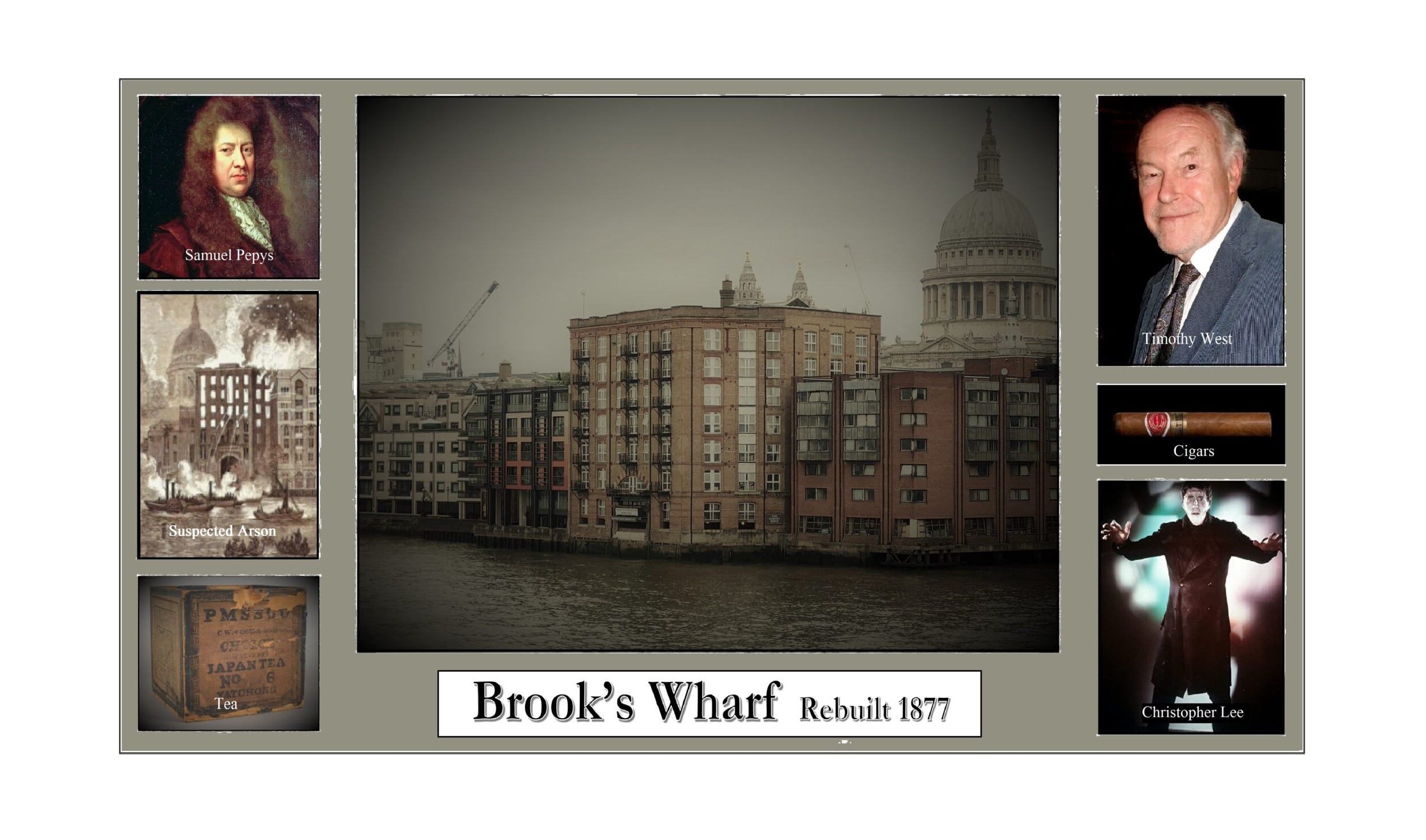 The only surviving riverside warehouse in the Square Mile, Brook’s Wharf now houses apartments and the Samuel Pepys pub. I’ve been scanning newspaper reports and other records covering the centuries to discover a connection between wharf and diarist, and along the way have uncovered the fascinating minutiae of a humble warehouse complex in the heart of the greatest city in the world.

Our story begins with King Henry VIII having a spot of bother with the Pope. To cut a long schism short, this didn’t end well for English monasteries. The King seized all of their assets in the late 1530s, including the wharf later known as Brook’s. It passed through many hands and was thus known by many names, such as Bockyng Wharf and Dockynes Wharf, commemorating owners now lost in the thick sulphurous London smog of time. Eventually possession passed to one Thomas Brooke, and this time the name stuck.

The site is enclosed by the river to the south. To the east lies Stew Lane, named after the women’s baths located there from as early as 1427. To the north is High Timber Street named after another wharf close by. To the west lies Broken Wharf, so named due to another religious spat: For forty years in the early 13th century two rival monasteries couldn’t agree which of them was liable for repairs there. By the time they resolved their differences it was no doubt very broken indeed. Between modern Brook’s Wharf and Broken Wharf is Sir John Lyon House, formerly Lyon’s Wharf and before that part of Brook’s Wharf. Sir John was Lord Mayor of London in 1554, and a member of the Worshipful Company of Grocers.

←The Agas map of London shows the muddle of buildings on the site in around 1560. Old St Paul’s Cathedral is top left-ish.

Brook’s Wharf was levelled in the memorable conflagration of 1666; sadly this was not the last time fire was to play havoc with the site.

← It was still a maze in 1676, when Ogilby & Morgan produced their map of the recovering City. The charmingly-named Dunghill Lane – now Gardners Lane – divides the site

Evidence of activity at the wharf before the 18th century is slim. Thankfully, from then on those new-fangled ‘newspapers’ began to report an entertaining catalogue of crime and health & safety issues. These shed light on day-to-day life at the wharf:

In June 1876 it suffered a devastating fire causing £250,000 worth of damage to the buildings and stored goods – almost £30m today. The fire was fought – to little effect – by fire brigade floats on the Thames and there was immediate suspicion of arson due to the rapid spread of the flames. William Rutherford, an engineer (‘and publican’, according to some particularly scurrilous reports) employed by the wharf operators, was about to be made redundant and was accused of starting the blaze in retaliation. Court reports list the destruction of 40,000 chests of tea and other goods, including coffee, sackcloth, lac-dye, gum and gunny cloth. Rutherford was found not guilty at the Old Bailey, to applause from the public gallery.

The resident gun club was back in operation by March 1877, the Daily Telegraph reporting that a member died suddenly of a heart attack while proposing a toast during an evening’s merriment. The Morning Post announced on 9th June that rebuilding was complete.

It didn’t take long for the usual procession of crimes and accidents to resume:

The north blocks, including Sir John Lyons House, fell victim to the Blitz. Amid the post-war redevelopment, the 1877 Thames-side block somehow survived.

In November 1956, the Kinematograph Weekly reported that the area was so frightening and deserted at night that Hammer Films kitted out the basement as Frankenstein’s laboratory for the launch party of their feature film The Curse of Frankenstein, with Christopher Lee attending in full monster make-up.

In 1969 the double-height entrance onto the Thames was glazed over as part of the new Samuel Pepys restaurant and pub. Staff dressed in 17th century costume and the walls were bedecked with ‘Pepysiana’. The reviews were not good. By the 1990s the wharf – aside from the pub – was derelict, and the post-war northern block fronting on to High Timber Street was demolished. The historic Queenhithe buildings nearby had been swept away in an ill-thought out hotel development: Things looked bleak for Brook’s.

The post-war Sir John Lyon House faired better for a time. It was considered ‘the world tea trade centre’ – at least by the Aberdeen Evening Express in 1994, reporting a visit to London by a party of French tea enthusiasts. The Tea Council had its offices there. It also contained the auction room of the Tea Brokers Association, which until 1990 hosted the weekly London Tea Auction. The auction had started at East India House as far back as 1679. The auction room also hosted a ‘Samuel Pepys Programme’ in July 1973, featuring actor John Standing as the famous diarist. In early 1974 the presentation was repeated, this time featuring Timothy West.

However, all tea-related activities were swept away in 2007 when Sir John Lyon House was replaced by a new apartment block. Avoiding demolition, Brook’s wharf was also converted into apartments. It was renamed Globe View and a new residential extension built on the vacant north lot.

→ Brook’s Wharf today – the Victorian yellow brick warehouse centre-left, amid a row of forgettable modern blocks. All the newer buildings – including the bizarrely orange-trimmed Sir John Lyon House – are lower than the warehouse due to modern height restrictions aimed at maintaining a view of St Paul’s.

← The new north block, its style and materials sympathetic to the 1877 building behind. With the widening of Upper Thames Street, High Timber Street – between Globe View and the concrete stairs – is now little more than a service road.

And the connection with Samuel Pepys? It seems there isn’t one. Pepys, as Chief Secretary to the Admiralty, would have been familiar with the buildings on the banks of the Thames, but despite my best efforts I can’t find any direct link to this specific wharf. It seems that it was, and remains, a marketing ploy. At least the staff don’t have to wear 17th century costumes any more.