Getting Dolled Up On The East Side 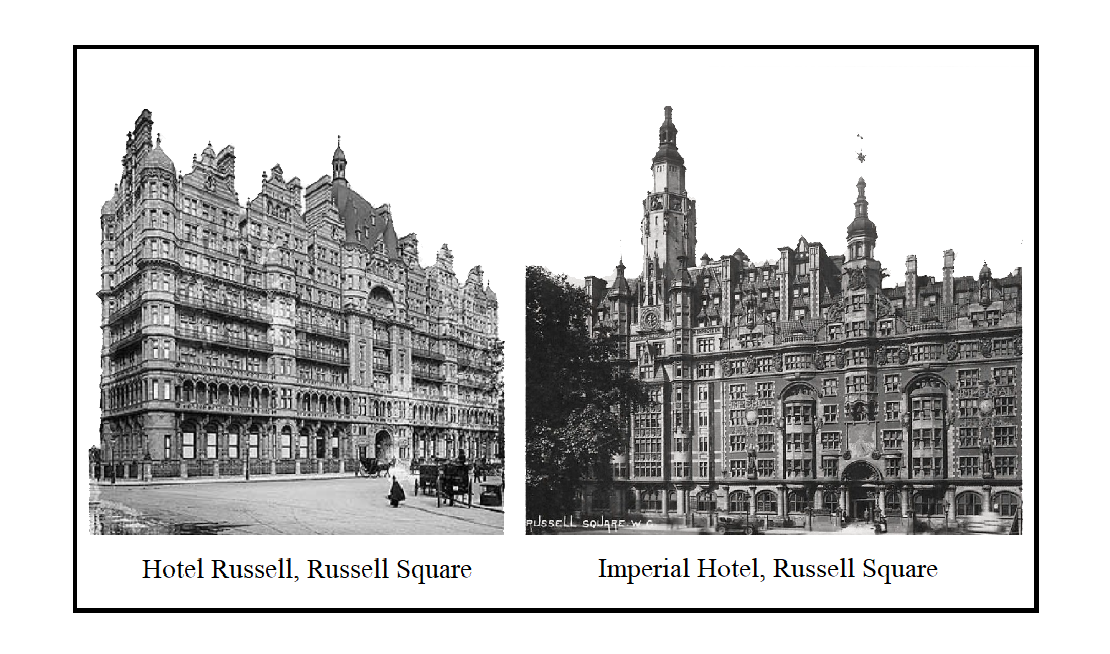 The Belle Époque, that period of prosperity leading up to the First World War, saw the construction of some remarkable London hotels. In this post, I take a look at two – near neighbours on the east side of Russell Square in Bloomsbury, both designed by Charles Fitzroy Doll. His decorative style is – rather implausibly – suggested as the origin of the phrase ‘to get dolled up’.

In February 1900, as the Second Boer War raged 8,000 miles away, newspapers reported a strange encounter in Bloomsbury. Amid heavy snowfall, Russell Square saw a spirited snowball fight between what the papers described as ‘pseudo Boers’ and Britons. A colossal but incomplete structure on the east side provided a formidable fortress for the Boers, which they defended successfully until British reinforcements arrived. This huge building site was the Hotel Russell. A row of Georgian terraced houses had been sacrificed to make room for it, and in a flagrant attempt to curry favour, Frederick Hotels Ltd. had given its palatial new establishment the family name of the Duke of Bedford, the landlord.

← The Hotel Russell soon after completion, dominating its surroundings with both its height and exuberance.

→ A Herzog Teleseme machine. The guest’s needs, from a glass of milk to the attendance of a chambermaid or valet, could be transmitted at the crank of a lever and press of a button.

Think of it as the Deliveroo app in a gilt case

← One of the reading rooms in 1900, and now ↓ as Fitz’s Cocktail Bar. The current decorative scheme makes it almost unrecognisable despite the survival of many original features, including the stained glass window.

Doll also designed some areas on the RMS Titanic, supposedly adapting the design of the hotel’s dining room for the first class restaurant of the ship. Perhaps I’m missing something, but after comparing what is now the ‘Galvin Bar & Grill’ with illustrations of the Titanic à la carte restaurant I just can’t see the similarities. Fortunately for the Russell, the Titanic connection doesn’t end there. On the second floor, atop a newel cap of the main staircase, crouches a small bronze dragon. He is known as ‘Lucky George’ because his twin – presumably ‘Unlucky George’ – was on board and doomed from the moment metal struck iceberg. After all, ‘Women, children and small bronze dragons first’ is not how the Birkenhead drill goes.

The Russell experienced the usual scandals of a London Hotel. 1915 saw guest Alexander Cinamon, accountant by profession, shoot a French waiter. As even biting the hand that feeds you is generally considered a faux pas, it should come as no surprise that Cinamon was declared a dangerous lunatic. In 1930, manager Alexander Turgel refused to give evidence in a divorce case involving a guest. The judge threatened to subpoena every member of staff, and with the prospect of hundreds of employees – from junior bootboy to head sommelier – lining up to give evidence, Turgel caved in. In 1948 he was back in court. He had been arrested for drink-driving and, bizarrely, insisted on reciting Oscar Wilde’s The Ballad of Reading Gaol to the police officer to prove he was sober. According to the officer, he ‘recited it very well and with full expression,’ suggesting a familiarity with Wilde’s poetic attack on the brutalism of the prison experience rare in a hotel manager.

Remarkably given the fragility the external decoration, the Russell suffered only moderate war damage. The main casualty was the huge 3-storey central copper dome, used to house some of the hotel staff. This was badly damaged during a bombing raid in May 1941 and not restored. A first change of ownership came in the late 1960s, and Trust House Forte subsequently commissioned a major restoration in the late 1970s to restore some of its grandeur. The hotel’s head painter, Fred, laboured so long on the Wharncliffe Suite ceiling that he became known as ‘Fredangelo’.

Further changes of ownership followed, as did a second major restoration and two name changes in 2018. The Kimpton Fitzroy, as it is now, is a trendy five-star hotel particularly popular with Americans. The Teleseme machines are long gone, but there is still a winter garden, known as the palm court. Animals are no longer relegated to the two-shillings-per-day kennels; unusually for five-star hotels pets are welcome as long as they can fit in the elevators. So, Irish wolfhounds are probably fine, but your pet bactrian would be camelum non grata unless perhaps it can recite The Ballad of Reading Gaol. I understand that can be mighty persuasive.

← The hotel today, and ↓ the lobby in 2016. The original marble is still very much in evidence.

Soon after the opening of the Russell, a second hotel began to rise just to the south, on the site of another Georgian terrace. This was the gloriously over-the-top Imperial, designed by Doll and constructed by the Walduck family as the flagship of their hotel empire. Opening in 1907 with a large mosaic sundial above the main entrance, an extension was opened just six years later taking the room count from 600 to 1000. Pevsner described the resulting colossus as a ‘vicious mixture of Art Nouveau Gothic and Art Nouveau Tudor’. For the vast spires, Doll is said to have taken inspiration from the castles of ‘mad’ King Ludwig II of Bavaria.

→ The Imperial Hotel, soon after completion of the 1913 works. Its rival, the Hotel Russell, should be visible extreme left but seems to have been airbrushed out.

Exceptionally fine Turkish baths were added as part of the 1913 works, and there was rumoured to be a subterranean passageway between them and the Guilford Suite of the Hotel Russell. Also added in 1913 was ‘London’s rudest clock’. Tame by today’s standards, it had a dial topped by the huge head of an old man who rolled his eyes and stuck out his tongue on the hour, every hour.

← The plunge pool in the Turkish baths. The fine decoration included a series of small stone Tudor figures.

→ The dining room in the inter-war period: Mass catering in a faux baronial great hall. The Imperial wasn’t as exclusive as the Russell.

The Imperial had its own scandals involving its own manager; in place of poetic Alexander Turgel, step forward Miss Marjory O’Sullivan. In 1928, the Illustrated Police News reported that Ernest Bailey, 34 and unemployed, was found guilty but insane on the charge of wounding with intent to cause grievous bodily harm to Miss O’Sullivan. She was in the news again in 1943, with an incident involving the Trinidadian cricketer Learie Constantine, who was working for the Colonial Office in Liverpool. Scheduled to play in a combined ‘Dominions’ team against an England XI at Lord’s in a charity match, he arrived at the hotel having reserved rooms for himself and his family. However, O’Sullivan allowed him to stay only one night, and used words derogatory even by 1943 standards to explain why he couldn’t stay longer. It seems the Imperial, or at least its manager, had a colour bar. Constantine brought a case against the hotel for breach of contract without due cause. In court, O’Sullivan argued that she had been concerned objections might be raised by the many white American servicemen staying at the hotel. The judge called her a ‘lamentable figure’ in the witness box, accused her of lying and suggested that she had been ‘grossly insulting’ to Mr Constantine. Unsurprisingly with that summing up, Constantine won the case.

→ Learie Constantine. By the time he died in 1971, the Right Honourable the Lord Constantine, MBE

The well-attended 1943 match produced a thrilling finish. The Dominions, set a target of 360, were all out for 351.

As with the Russell, the Imperial managed to come through the war relatively unscathed, but its days were numbered. The Walduck-controlled Imperial London Hotels group began to redevelop its properties in the post-war period, and claimed that the Imperial was structurally unsound. This seems unlikely given that the sturdy Russell was designed by the same architect, but then the Russell had had one huge advantage over its neighbour from the outset – en-suite bathrooms. Upgrading the now woefully inadequate Imperial may have been prohibitively expensive, and the structural problems conveniently made listing impossible and demolition inevitable.

→ The Imperial in its final days, with key features marked.

The President Hotel, opened in 1960, was also owned by Imperial London Hotels.

The Imperial had been levelled by the start of 1967, despite a campaign by the Victorian Society to save the hotel that focused on the undoubted architectural quality of the Turkish baths.

← Curious survival: A sign for the Turkish baths still visible more than 50 years after demolition. It is set into the pavement in front of the President Hotel, at the corner of Guilford Street.

The Imperial’s replacement shares its name and owner but none of its street presence. Designed by C. Lovett Gill & Partners, it is borderline brutalist in style and its appearance has never been popular; in 1977 journalist Tony Aldous suggested dynamite as the best way of improving it. London has some remarkable post-war buildings but the Imperial Hotel is, in my opinion, not one of them.

← My best effort at making the Imperial look attractive involves hiding as much of it as possible behind trees. The President survives to the left. Both are still owned by Imperial London Hotels.

→ Some statues from the Turkish baths were saved. They now stand unhappily in a shrubbery next to the rebuilt hotel’s car park entrance

→ The galleon and bells nearby also came from the old building. The galleon was on the highest pinnacle of the 1913 extension.

The clock might be the 1913 original, but no-one seems to have thought the ‘old man’ worth saving.

The Imperial is currently closed for upgrading and refurbishment. It will re-open as a four-star hotel in 2022. The company’s justification for the project leaving the frontage unchanged is that the building is ‘much-loved’. By whom? They need to name names. The planned public ‘sky lounge’ on the roof may, however, prove a popular addition – even with me.