Dancing with the Devil: The Life and Times of Bleeding Heart Yard 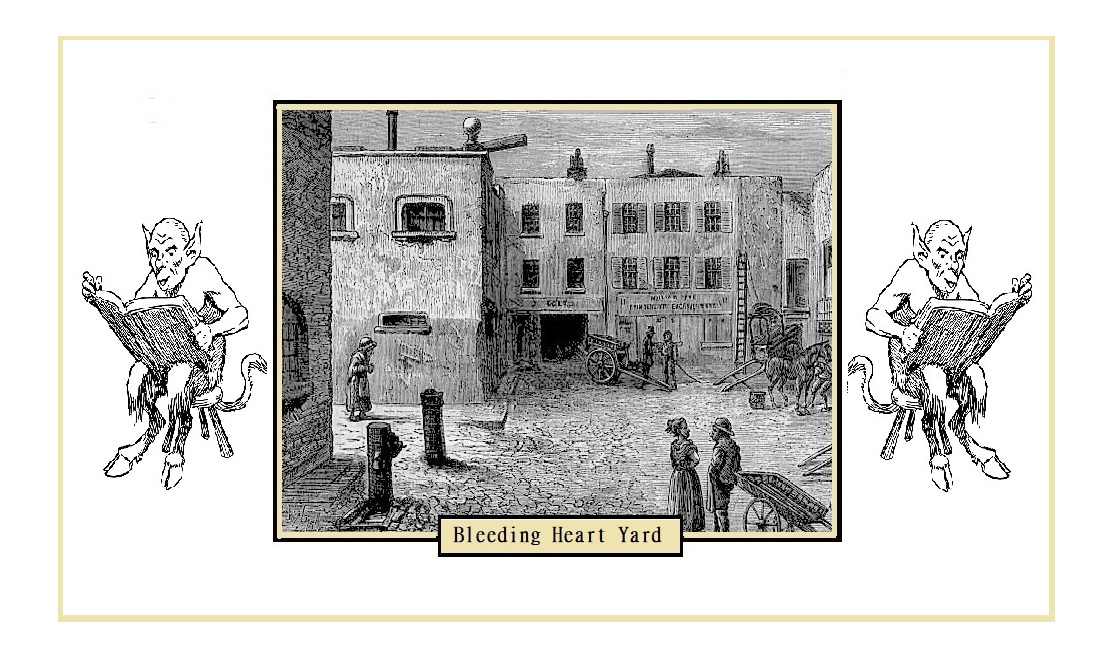 A tiny precinct close to Hatton Garden and just 100 metres north of the City of London, Bleeding Heart Yard has acquired more than its fair share of legends and tales. Prepare to meet bishops, Elizabethan courtiers, Charles Dickens, Satan, the Spanish Ambassador, porcupines and more than a few Italians.

When Bishop of Ely John Kirkby died in that year he left his personal London pad to his diocese, making it the London home of successive Cambridgeshire bishops. Kirkby’s successors added to and improved it over the years. Occasionally it was rented out; in 1381, after the destruction of the Savoy Palace by some revolting peasants, the homeless John of Gaunt, Duke of Lancaster took up residence and stayed put until his death in 1399.

According to Shakespeare in Richard III (c.1594), the garden produced delicious strawberries. However, by the time Bill was actually writing his play most of the garden was gone, for in 1576 Queen Elizabeth I had forced the bishop – much to his chagrin – to lease part of the land and even parts of his mansion to her favourite, Sir Christopher Hatton (1540-1591). This transaction was, according to historian Walter Thornbury, “the cause of infinite loss and trouble to the Bishops of Ely for upwards of an hundred years.” Sir Christopher constructed Hatton House on the garden, and was subsequently granted even more of the bishop’s property.

The story goes that Lady Hatton, Sir Christopher’s wife, made a pact with the Devil, selling her soul so favours might be granted to her husband by the Queen. Soon enough the favours flowed, including the controversial lease. Unfortunately, Lady Hatton failed to invite Satan to the housewarming. The cloven-hooved gent, feeling a bit miffed at this omission, gate-crashed the celebrations and snatched the lady away during a dance. Only her heart was found, next to the water pump in the yard outside.

This tale gained a wide audience when it appeared in 1837 as one of The Ingoldsby Legends, ghost stories written by Richard Harris Barham. It ended with the lines:

‘The House-Warming!!, or the Legend of Bleeding Heart Yard’, Richard Harris Barham, 1837

As Barham suggests, the yard is said to be haunted by the ghost of Lady Hatton with her disembowelled heart, forever at the handle of an imaginary pump, forever failing to draw water. Sadly for ghost hunters, there are two serious flaws in this story:

1. Sir Christopher never wed. It turns out Barham was muddying some already murky waters. Earlier sources had claimed the lady, Elizabeth, was the illegitimate daughter of Sir Christopher, or the widow of his nephew and heir William. Both ladies existed, but neither was murdered. Furthermore, in some versions of the tale the gentleman is not the Devil but the Spanish ambassador at the court of King James I, Diego Sarmiento de Acuña. Admittedly, to English puritan minds the difference between Devil and Diego was negligible.

← Diego Sarmiento de Acuña, Conde de Gondomar. A hate figure in England, he was a Machiavellian schemer blamed by some for the execution of the popular Sir Walter Raleigh.

2. Bleeding Heart Yard did not yet exist. The site was still occupied by the bishop’s dung heap and there is no suggestion that Sir Christopher wished to add this pile of poo to his estate. Said dung would be left in peace for another century or so.

Alternative Origins of the Name

The legend of Lady Hatton having been consigned to this post’s own dung heap, we need perforce to search for other likely origins of the yard’s name. Luckily, various possibilities are discussed in chapter, verse and worldwide web:

← The current Bleeding Heart Tavern at the entrance to the yard, painted in a shade that can only be described as oxblood. This is the latest manifestation of a hostelry which has been on the site since at least 1746.

The Hatton family ran into money troubles and just before the restoration of Charles II in 1660, they demolished Hatton House to make way for a new residential district – a ‘little towne’, according to diarist John Evelyn – that became known as Hatton Garden. This annoyed the bishop, who thought he still owned the land. Carpenter Abraham Arlidge was the developer.

Eventually resigned to the situation, the bishop sold his neighbouring dung heap to Arlidge in the early 1680s, and a stable yard was erected on the site. However, during his building work Arlidge somehow blocked the Bishop’s passage into the yard. This caused further irritation to the bishop who, it seems, claimed right-of-way over the passage and managed to force Arlidge to unblock it.

With the passing of time the yard’s name evolved into Alldridges, all the while failing to rise above the social standing of its malodorous predecessor.

In 1772, Bishop Edmund Keene was forced by Act of Parliament to sell what remained of the mansion in his possession to the Government, having failed to resolve the dispute with the Hattons over exactly who owned what. He moved to a fine townhouse in Mayfair, while an upmarket development called Ely Place was erected on the mansion site. The contrast between posh new town houses and low stable yard must have echoed that between mansion and dung heap.

The governance of Ely Place, which remains to this day a private street, was formalised in 1842 by its own dedicated Act of Parliament; it is run by elected commissioners and although they have lost most of their powers to the London Borough of Camden, a beadle – safely sitting in a quaint gatehouse – is charged with a legal responsibility to ‘keep watch’. Well, that and raising and lowering the traffic barrier.

A widely syndicated newspaper report in 1831 revealed the state of the former stable yard. It suggested that it was now home to Italian youths who would walk the streets with an organ and exotic animal, begging for coppers from entertained passers-by. They lived a life of near servitude; sleeping six or eight to a bed on upper floors and provided with only a bowl of gruel in the morning by the men who owned and rented out the animals. The reported daily rental fee was one shilling and sixpence for the organ, with a sliding scale for animals: Dancing dogs (with tutu) were available for an astronomical five shillings; three shillings got the youth a monkey dressed in a uniform; two shillings sixpence for a porcupine; for an undressed monkey two shillings; and at the bottom of the hierarchy, tortoises could be had for a mere one shilling and sixpence.

As with almost any area of Victorian London, Charles Dickens had something to say about the yard. He would have been familiar with the neighbourhood at around the time of the organ-grinder reports, having lodged at Furnival’s Inn nearby from 1832 to 1837 while writing Pickwick Papers. In Little Dorrit, it is home to the friendly but poor family of Mr Plornish, a plasterer. Dickens describes a yard down on its luck but with an ‘ancient greatness’ about it, and goes on …

“Two or three mighty stacks of chimneys and a few large dark rooms which had escaped being walled and sub-divided out of the recognition of their old proportions, gave the Yard a character. It was inhabited by poor people who set up their rest among its faded glories…”

This ‘ancient greatness’ seems a complete fiction – there were no such ‘ancient glories’ in its past and the yard’s plight was dire. The 1851 census lists around 130 people crammed into its decaying buildings, and things did not improve. In an 1857 newspaper report on a stabbing incident, the yard is stated as being occupied by ‘a great number of low persons’. If all of this reminds you of another Dickens novel, Oliver Twist, it is hardly surprising. Dickens made the adjacent Saffron Hill the home of Fagin.

By the 1880s the yard was mostly derelict and newspapers were writing its obituary, an ideal excuse to trot out the Hatton and Dickens connections. Those that did live in the yard remained at the very bottom of the social ladder; in 1881, one address alone housed nine teenage shoeblacks – those who cleaned shoes on the street for a pittance – along with seventeen others all lodging with a family of three. Yet somehow the yard’s complete obliteration, always seemingly just around the corner, never happened. Plans for an early form of social housing there came to naught; the slum clearances associated with the creation of nearby Holborn Viaduct left it untouched. Finally, at the end of the century, the squalid residential buildings and burnt out shells were quietly replaced by inoffensive warehousing around the same cobbled yard. The resident population plunged to one single household of 10 people in 1901.

→ No. 2 Bleeding Heart Yard on the west side, typical of the Victorian warehouses that now dominate. The huge ‘2’ painted on its wall leads me to suspect that a previous owner had a deep mistrust of postal workers’ eyesight.

There remained one whimsical leftover from the time of the Arlidge development. Newspapers in 1940 reported that despite the difficult Blitz conditions, the wooden door between Ely Place and Bleeding Heart Yard was still opened by the Ely Place commissioners once a month to preserve the ancient right-of-way the bishops had fought to reinstate and maintain.

→ The doors at the back of the Bleeding Heart Restaurant. Ely Place lies beyond. The yard is, these days, mercifully dung-free, although in 2017 Camden Council bemoaned the ‘badly re-laid granite setts’ (what you and I would call cobbles) in the approach to the gates. Some people are never satisfied.

As far as I can determine, the doors are for residents of Ely Place only – signs put up by the commissioners make clear it is not a public right-of-way.

The quaintly-angled narrow corner building on the East side was the only significant casualty of the Blitz, and what we see now is a partial reconstruction. The bland 1970s building at No. 8 was damned by Camden Council in 2017 as one of the few in the Hatton Garden area to make a negative contribution to the streetscape. It is currently having an £8million facelift that will give it an extraordinary faux-Edwardian look, supposedly following the styles of the six buildings on the site demolished more than 40 years ago. This will be achieved by using – of all things – metal mesh. This may be pleasing to the eye of Camden Council, but any passing architectural historian will see it for what it is – 1970s mutton dressed as some sort of weird mutant belle époque heavy-metal lamb.

← The East side – the same view as the title picture, a century and a half later. 8 Bleeding Heart Yard is on the left, shown prior to its makeover.

A Load of Old Cobbles

The yard is now home to a bistro and a restaurant, under the same management as the tavern and well-regarded. It remains picturesquely cobbled, and No. 8 will soon return to retail or restaurant use, with some additional jewellery workshop space above. It seems Bleeding Heart Yard is finally rising above the social status of a dung heap.