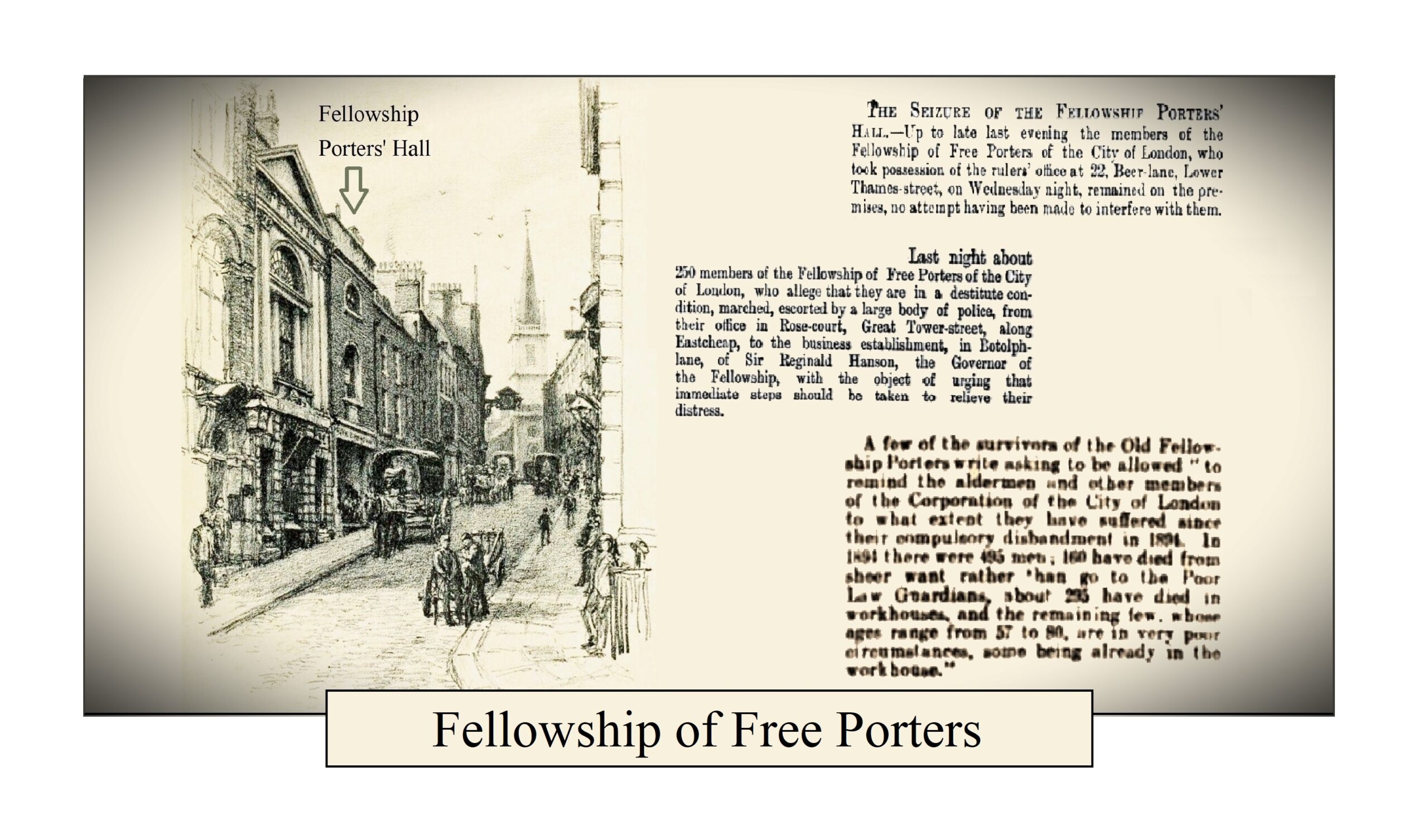 The once-mighty Fellowship of Free Porters, with its origins in the porterage gangs of the 13th century, was overwhelmed by the challenges of the 19th. It entered a spiral of decline, corruption and internal strife, which ended in abolition by the City of London Corporation in 1894. Even winding up its affairs produced chaos, leaving many former members to die in workhouses.

So who were they?

The fellowship was one of the porterage groups allowed to operate in the Square Mile. The privilege of loading, unloading and moving cargoes within the City belonged to the Corporation and was delegated to these groups under rules laid down by the Court of Common Council, its main decision-making body. There was strict demarcation between the groups: Fellowship porters had a monopoly on goods measurable ‘by dry measure’, such as corn, salt and coal. They were known as white mice due to the white coats they wore when dealing with ‘clean’ cargo.

Fellowship ordinances from 1566, now in the London Metropolitan Archives, show the rules and charges of the time: Members had to be freemen of the City, pay £5 admittance, then 5 shillings a quarter (‘quarterage’) and a penny of every shilling earned. The fellowship was arguably of greater importance and higher status than the other groups, and from 1786 had a hall for meetings at 17, St. Mary-at-Hill. However, it was not a City livery company, as it was never awarded a livery (uniform) by the City authorities. In this respect it was similar to its neighbour on St. Mary-at-Hill, the Company of Watermen & Lightermen of the River Thames.

The fellowship may be familiar to fans of Dickens. Much of ‘Our Mutual Friend’ is set near the fictional Six Jolly Fellowship Porters pub, probably based on the Grapes in Limehouse. Here, porters drank the beer named after them while waiting for signals from barges sailing up the Thames.

←The enjoyable Zythophile blog recounts how fellowship porters patronised the Ship tavern in Holborn. A new member would go through initiation there: His badge was dropped into a quart of strong ale, to be extracted by teeth with no spillage.

The Ship has been on this site from the 16th century, but sadly the current building dates only from the 1920s, so wont have witnessed any of the fellowship ale quaffing.

Two other groups, the Tackle-house porters and ticket porters, were later forced into a marriage of (the Corporation’s) convenience. Tackle-house porters, who kept equipment needed to load and unload goods, tended to be wealthy men of good standing, appointed by the twelve great livery companies; they didn’t get their hands dirty, and the merger made them ‘Rulers’ – a genuine title – over the ticket porters, who did. Ticket porters were named after metal plates, or tickets, they wore on their belts.

→ An illustration in William Darton’s City Scenes (1828) shows (left to right) a fellowship porter , waterman and ticket porter. Unlike the livery companies, the porterage guilds relied on the goodwill of the Corporation for their existence.

Fellowship rules ultimately allowed a membership of 3,000 and this limit was almost reached as City porterage demand peaked in the late 18th and early 19th centuries. However, challenges were emerging. New dock facilities began to open downstream, away from the City. The porters’ regulated rates of pay were far higher than those charged by casual labourers and, inevitably, the monopolies began to be contested by organised, independent labour gangs and merchants with their own workforces. But if the Corporation hoped the fellowship would quietly whither away, it was to be disappointed. The members petitioned the City for protection against the usurpers, one member writing in the Albion and Star newspaper in 1830 that “… we ask nothing new; we shall be contented to be restored to our privileged rights. We are aware that the privileges are granted by charter, confirmed by acts of parliament, to the Mayor, Commonality and Citizens, and their successors, for ever; and to be deprived of our rights, which are our living, we feel a great hardship.” But membership was already declining, and City authorities seemed unsympathetic.

There were other problems. The high fees paid by a large membership produced a prosperous organisation and bloated managerial structure. Members elected to the Court of Rulers, the governing body, were handsomely paid, leading to corruption of the election process and maladministration of funds by men unfit to hold office. Additionally, Rulers expelled any member they took exception to. Some thought the Rulers were out of control; as early as 1818 those members had ‘gone public’, appealing to City authorities for help in ensuring the elections occurred every year – as legally required – and fellowship funds intended to aid the destitute, aged and sick among their number were used for that purpose. This issue would not go away.

On top of all this, and despite their monopoly having been broken, members were still obliged to pay fellowship fees to no advantage. Membership dropped to around 500. This exacerbated the effects of financial misjudgements. Management was perhaps not trimmed fast enough when the leaner times arrived. The fellowship began haemorrhaging cash and their historic hall was leased out to raise funds – the Rulers instead met at Rose Court, a stone’s throw from the Tower of London. The Governor, traditionally the Alderman for the ward of Billingsgate, seemed unable – or unwilling – to halt the decline.

Inevitably, many unemployed members were starving. They must have believed they had been deprived of their living through the indifference of City authorities reluctant to intervene to defend their monopoly and reform their organisation. The authorities, for their part, must have realised the monopoly they were responsible for upholding was an anachronism, the fellowship itself causing nothing but trouble, constantly at war with both itself and organised labour gangs.

Chaos erupts as the end draws near

An 1891 court case was brought by a member against workers recruited by one of the gangs. The plaintiff won his case, but the City Commissioner, in passing judgement, made clear his feelings, unsubtly reminding the Corporation that the fellowship was under their control and that the ‘fellowship porters and their privileges would be swept away one day’ . Not that there was much left of those privileges: “Organised labour, which being entirely free from the heavy fees and exactions that handicap the fellowship porters, has succeeded in almost driving them from the field” claimed the Evening News. The fellowship, in a last ditch attempt to stop the inevitable, petitioned Common Council for a reformed constitution. But Common Council had taken the Commissioner’s hint. Allowing the troublesome fellowship to slowly whither was no longer an option – it was to be quickly and humanely dispatched: At the end of 1892 a committee recommended abolition.

The plan was to distribute liquidated fellowship assets – thought to be worth around £1.4m in today’s terms – to members after abolition, but it quickly became apparent the porters couldn’t wait; the job market had descended into a free-for-all and many members – freemen of the City all – had been left destitute. Something had to give, and in September 1893 desperate porters siezed the offices in Rose Court. They demanded a refund of the corrupt Rulers’ salaries, the rapid sale of the fellowship’s hall, and a moiety (small share) of corn dues paid to the Corporation. What they got – in mid-October, after they were ejected by police – was an emergency payment of ten shillings per week per man as an advance against the final distribution of funds.

A brief period of calm was shattered when – perhaps because the petty cash had been exhausted – the advances stopped. An emergency meeting between the Rulers, porters’ representatives and Common Council failed to achieve progress. Rose Court was again occupied, and porters marched to the offices of the Governor, Sir Reginald Hanson, in nearby Botolph Lane – shouting that they were ‘freemen of the City – free only to starve’. Amid scenes of ‘considerable excitement’ (claimed the Morning Post) the group’s leader John Haley was arrested, but later released. Hanson insisted he was in no position to distribute money. Winter came without reports of any further financial assistance for members.

→ Sir Reginald Hanson. As Alderman of Billingsgate from 1880, he was the last Governor of the fellowship. He was also Lord Mayor of London 1886-7, MP for the City of London when the fellowship was abolished, and looks suspiciously like a cross between Jim Broadbent and Stephen Fry.

The end of the road

In February 1894, Common Council ordered dissolution of the fellowship, to take effect 24th June. Still members waited for help. On 20th July, the freehold of the hall was auctioned, followed on 3rd August by silver and other fellowship effects. These included a Charles I goblet, a Queen Anne tankard and a loving cup, and pieces presented in happier times by various members.

On 12th October, the members could wait no longer. They protested outside Hanson’s office again, claiming distribution of the proceeds was being unnecessarily delayed. Hanson’s excuse this time was that he needed a unanimous vote of the trustees and his deputy, one of those trustees, was in France. There were further protests outside his office on the 16th, and on Tower Hill on the 17th. Finally, four days later the trustees approved distribution of interim payments equivalent to a refund of the six guinea joining fee and four shillings quarterage. Three days after that, payments began at 21 Eastcheap, opposite Hanson’s business premises. The building was besieged by desperate men; the process took two days.

A final distribution of assets was made in December, and the fellowship ceased to exist. Almost immediately there were newspaper reports of a destitute porter named Caleb Higgins drinking himself to death in the toilets of the Holborn Union Infirmary on the cash he had received, variously reported as being between £9 and £20. It seems the moderate windfall did little to help members; later newspaper coverage continued in the same gloomy tone:

→ The fellowship’s hall today, centre, with the ornate, stone-fronted Watermen’s Hall to the left. In 1981, the Company of Watermen bought nos. 17 & 16 to incorporate into their own premises. None of the original interior survives.

In 1950, the City’s museum at Guildhall introduced a display of items related to the Fellowship Porters. With the last members dead, it seems the fellowship could finally be viewed through the rose-tinted spectacles of nostalgia.