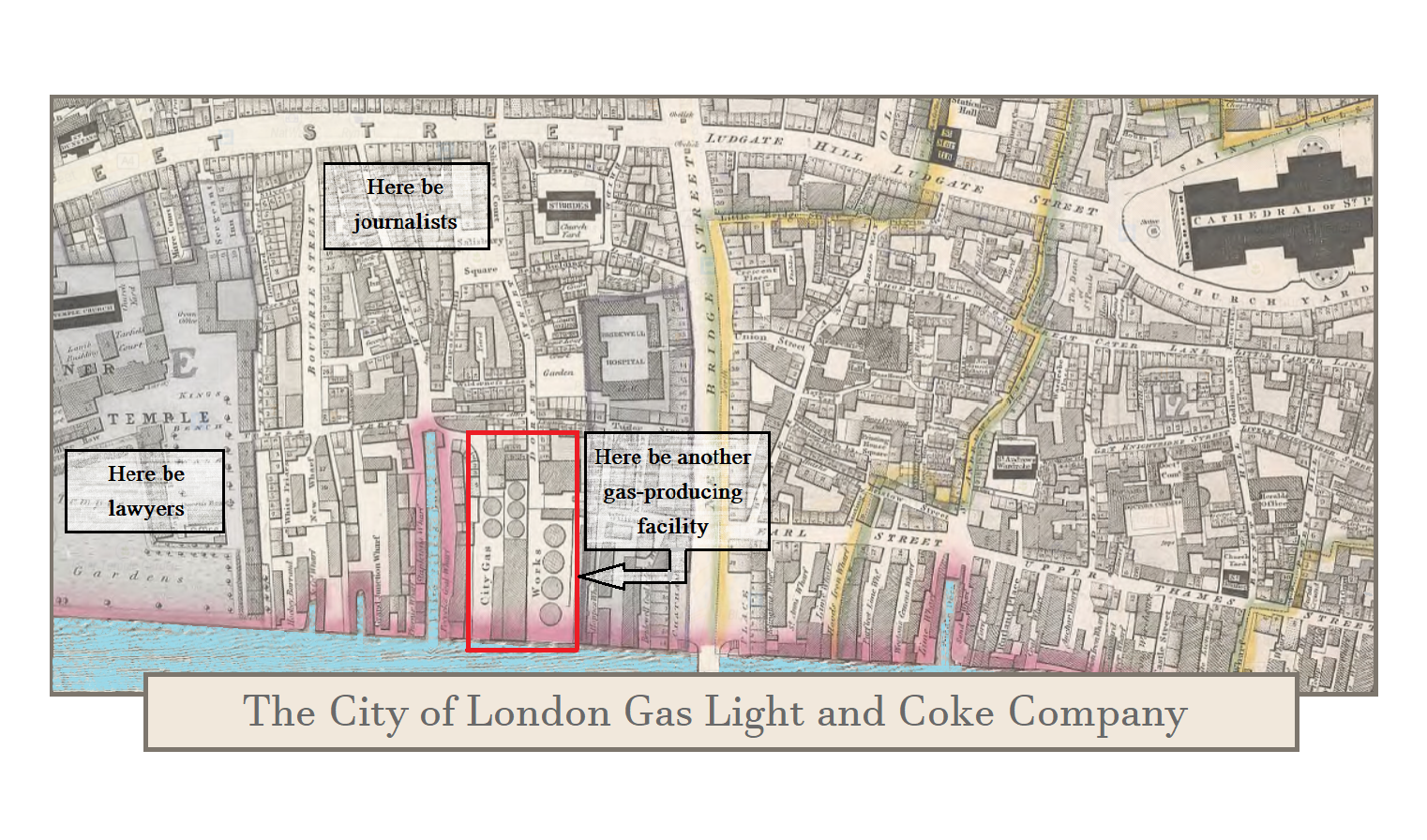 It may surprise you – it certainly does me – that there was once a large gasworks in the Square Mile. For more than half a century the few blocks between Blackfriars and Whitefriars in the City’s south western corner were dominated by the City of London Gas Light and Coke Company.

When William Knight came looking for a new site for his gasworks in 1814, the neighbourhood had been an undesirable location for hundreds of years. A Carmelite order, wearing cloaks that gave Whitefriars its name, had departed in 1538 with Henry VIII’s dissolution of the monasteries. Their precinct had quickly descended into a lawless slum known as Alsatia (see my post ‘How to Talk in the Wild West’ for more details). Soon after, Bridewell, the royal palace Henry had built at the edge of Blackfriars, was turned into a prison and a shelter for the homeless. Sandwiched between these two, and with the increasingly filthy Thames to the south, the site at least got a footnote or two in history. A resident, Mrs. Pepys, gave birth to a son, Samuel, in 1633. It also played host to the spectacular but short-lived Dorset Garden Theatre, completed in 1671.

However, both diarist and thespians were long gone by 1814, and the run-down wharfs, timber yards and warehouses must have been just what Knight was seeking. Producing town gas from coal for municipal consumption was a boom industry still in its infancy, and a very unpleasant one for those nearby. His enterprise had first opened the year before in Fetter Lane, but his respectable neighbours there were cutting up rough after his prosecution for endangering the health of the inhabitants. Knight relocated to Dorset Street (now Dorset Rise), close to the prison’s burial ground, whose residents were somewhat less likely to complain. Despite this, Knight was soon creating problems again. This time he was charged with causing a public nuisance due to a pungent smell. Thomas Edgely, local coal merchant, claimed that his coal-heavers were sickened by the smell and ‘it is no easy matter to turn a coal-heaver’s stomach’. Quite – one rarely sees a coal-heaver heaving anything but coal, and certainly not his own stomach contents.

In 1817 Knight’s whiffy company gained statutory powers under the City of London Gas Act to supply the cities of London and Westminster, and the Borough of Southwark, south of the Thames. The Act might just as well have been a licence to print money. By 1820 the company had outgrown the Dorset Street site, which was converted into a coal store for an enlarged gasworks – one of the biggest in the world at the time, stretching down to the riverbank. Other companies were also jumping on the lucrative gas bandwagon: In 1822, Knight’s company was one of only seven producing gas in the whole metropolis. Seven years later, there were two hundred.

Probably the most startling event to happen at the works – save for the achievement of turning coal-heavers’ stomachs – was an explosion on the 24th of October 1855. The Morning Herald suggested it was equivalent to the ‘discharge of several pieces of artillery [causing] the greatest consternation’ both in the City and Southwark. Houses were shaken, windows broken, inhabitants ran out in a ‘partial frenzy’ – whatever that is – and horses drawing vehicles on Blackfriars Bridge and Fleet Street were frightened. There were no reported injuries, but it was a close call. A large piece of gas main thrown into the air narrowly missed two passing children, and the brick wall of the meter room was blown outwards, the distorted structure just managing to stay standing. The City of London Police prevented crowds of curious onlookers from getting too close, and in what I suspect was an early example of news management, the story dropped off the front pages as quickly as it had appeared.

Truth be told, the second half of the 19th century was not kind to the gasworks, despite its undoubted profitability. The complaints over the smell had resumed by the early 1850s: There were proceedings against the company in both 1854 and 1855. A year later, it was the turn of those paragons of manly stoicism, the City of London police (the ‘nickers’ – a slang term for police – of the title), forced to walk the Whitefriars and Bridge Street beat, to suffer heaving stomachs. Both they and local residents objected. The case was heard by the gloriously-named Court of Sewers. A report by eminent fellows of the Royal Society and the nearby Worshipful Society of Apothecaries made much mention of offensive effluvia, sulphuretted hydrogen and ‘blue-billy’, a worthless and disgusting by-product. The case ended in a war of words between the Court of Sewers and the Court of Aldermen – the upper house of the City of London Corporation. The Aldermen claimed that the Court of Sewers was asking Aldermen to do its dirty work for it by committing ‘the act of folly’ of indicting the company to remove relatively new structures that had cost an estimated £500,000 to build – £57 million in today’s terms. Unsurprisingly, no action was taken.

In 1860, James Smith, a trainer of child thieves, was found guilty of stealing around 30lbs of coal from the company’s barges moored close to Whitefriars Dock, and assisting children to steal more. The case led to the startling admission by the company that they had been losing an estimated 180 tons of coal to child thieves each year. Then, in 1864, a second explosion occurred, near a new gasometer, one of 10 on the site by this time. This explosion, smaller than the 1855 incident, nevertheless caused the death of a labourer.

By the late 1860s, the wind of change was blowing through both the gas industry and the Blackfriars neighbourhood. The City of London Gas Act 1868, aimed at increasing the illuminating capacity and decreasing the price of gas supplies in the Square Mile, soon led to the company amalgamating with the larger Chartered Gas Co., set up by Royal Charter in 1812 as the first major gas company in the world. There had been complaints since 1849 that the two were in cahoots, abusing their dominant position to fix gas prices in the City, and the resulting corporate leviathan is considered the forerunner of British Gas. At the same time, coal deliveries to the site were made more difficult due to the construction of underground railway lines under the new Embankment, with the old Whitefriars Dock swept away as part of the development.

← A view from the south east of Blackfriars Bridge looking north to the City, c.1870. In the distance to the left, there is the extraordinary sight – for those of us familiar with the offices and apartment blocks of the 21st century square mile – of a huge gasometer close to the famous ‘wedding cake’ St Bride’s steeple.

In 1870 the neighbourhood looked on in horror as the adjacent Grand Junction Wharf went up in flames, and terrified residents of tenements set ablaze had to flee ‘almost in a state of nudity’, claimed the Evening Standard. Fortunately for the entire City, the fire brigade prevented the flames spreading to the gasworks. Even more fortunately, the gasworks’ time was almost up.

They were by then outmoded, and operations ceased in May 1872, although demand continued to outstrip supply and production resumed during winter months until spring 1875. By then it was surplus to requirements, with the opening of the Chartered Gas Co.’s collosal new works at Beckton, further downstream. The City of London Corporation purchased the entire site for £170,000, around £20m today. The site was cleared soon after.

At around the same time, De Keyser’s Royal Hotel next door was rebuilt in a grand style. Thus, the memories of Alsatia and the Bridewell were exorcised, as the area became considerably more fragrant, and therefore desirable, to both businesses and residents. New roads were added, as were high-profile developments included the Daily Telegraph printing works and the new home of Sion College. With the Corporation in charge, prestigious municipal facilities followed – the Guildhall School of Music and the City of London School, complete with playground and gymnasium.

Today, the area consists mostly of high-end offices and lawyers’ chambers. De Keyser’s Hotel was replaced by the vast Unilever House, and the colleges and school are now home to investment banks and other prestigious companies. Even those clattering printing presses and chattering journalists have finally been banished.