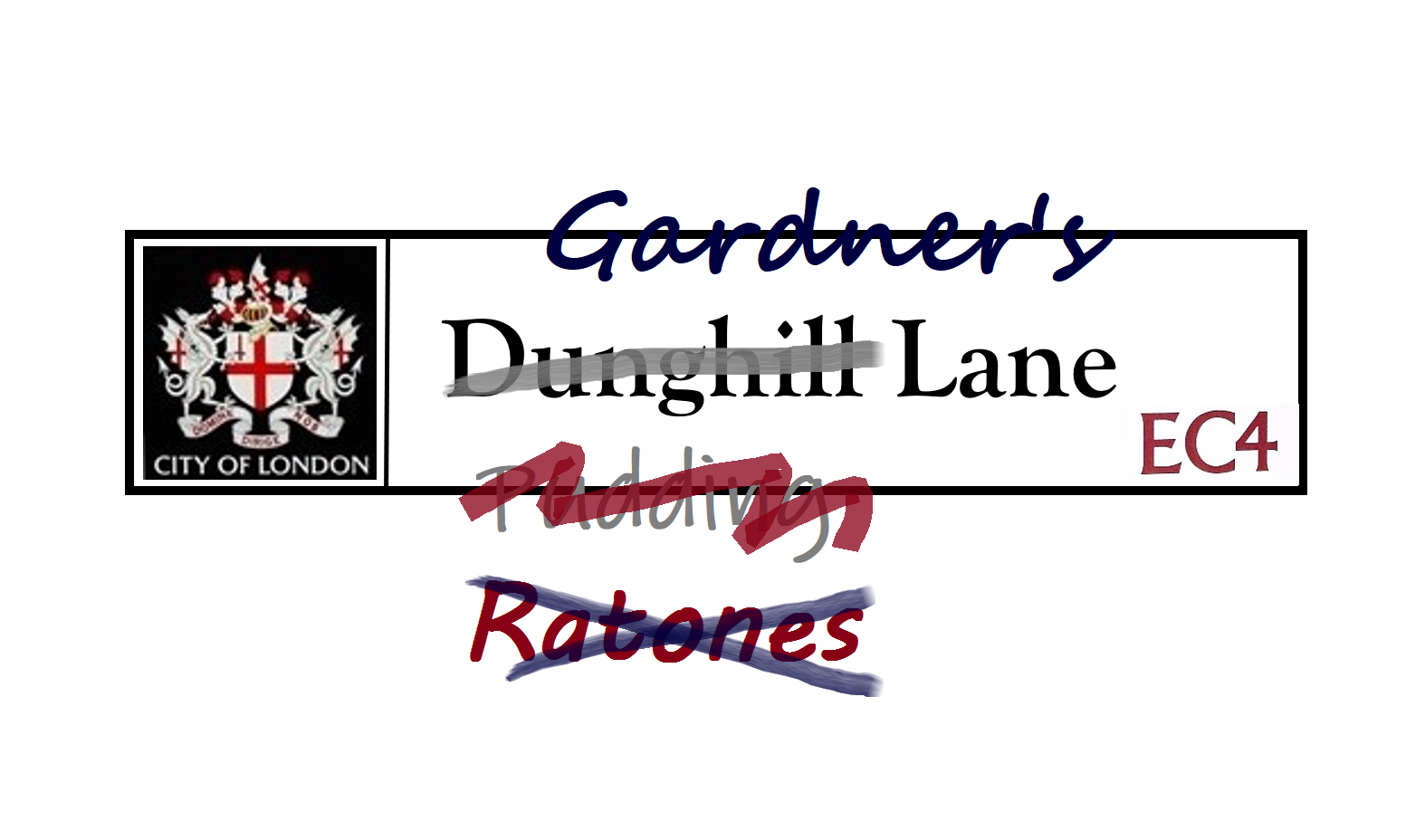 Here’s one final helping of strange and obscure road names in the City of London from our old friend, Swedish academic Eilert Ekwall. Prepare to snigger, salivate and feel ever-so-slightly nauseous.

In need of refreshment?

Then try Mede Lane: The lane where mead was to be had. Unfortunately for us, Ekwall concedes that identifying where it was – and perhaps still is, hidden away and full of annoyed mead-sellers with no customers – is mission impossible. All he can deduce is that it was, appropriately, in Vintry ward – named after the Worshipful Company of Vintners, the City livery company for the wine trade.

Alternatively, there’s Beer Lane: Almost certainly named after an inn, but not because of the beverages served there – that would be far too obvious for London. Rather, it seems likely that the tavern in question was at the sign of a dancing bear, and ‘beer’ a corruption of ‘bear’. Another lane now missing, it was probably in the vicinity of Lower Thames Street, near the Custom House.

Bringing out the inner schoolboy:

Maiden Lane, north of Cheapside, was perhaps named after prostitutes gathering there; what is certain is that it met Lad Lane at Wood Street, which would make any schoolboy chortle. Sadly for the schoolboys, ‘Lad’ was derived from the making of ladles in the locality. The derivation of Wood Street is uncertain; take your pick from three options: (1) Wood sellers occupied the street in early medieval times, (2) it was mostly made of wood whereas – by implication – streets nearby had some stone and brick buildings, or (3) it was named after Thomas Wood, a sheriff of London in 1491, whose family owned property in the area. Both Maiden Lane and Lad Lane were replaced in 1845 by the wider but entirely double entendre-free Gresham Street – named after Thomas Gresham, who built the Royal Exchange in 1571.

As for the origin of Cock Lane, there are multiple possibilities here too. It is probably a place where gamecocks were reared or sold. However, a butcher named William Cok owned buildings in the lane in 1300. To add to the confusion, there were houses of ill-repute in the lane at around the same time and if you’ve learned nothing else from these posts, you will know that street name derivations could be very, very crude in early medieval times. So really, take your pick. The lane still exists, narrow and cobbled, consisting mainly of modern offices.

← Despite modern developments there are some points of interest in Cock Lane. At the western end is this fine Victorian faience shopfront. The building housed the offices of John J. Royle, a man famous – apparently – for patenting a popular self-pouring teapot in 1886. He also produced more routine engineering items like steam traps.

→ The other end of Cock Lane. Searching for a scapegoat after the Great Fire, Londoners’ suspicions focused first on the French, then God. They feared the sin of gluttony had incurred the Almighty’s wrath, and this condemnatory memorial, the ‘golden boy of Pye Corner’, was erected at the western edge of the area destroyed.

Three that were once best avoided:

Fowle Lane is not derived from the selling of chickens (unlike Poultry, and the endearing but lost Chick Lane). It is instead a corruption of Foul, being rather evil-smelling – its position in Billingsgate ward close to the fish market couldn’t have helped. It was renamed Cross Lane, and now with no discernible aroma it leads to the gardens created in the ruins of St. Dunstan-in-the-East.

← A view of the picturesque ruins of St Dunstan, from the not-at-all malodorous Cross Lane, née Fowle Lane

Although many ‘-borne’ ending roads are named after streams, Ekwall believes that Sherborne Lane was derived from Shiteburgh – probably ‘a jocular name for a common privy’. Yup, this pleasant-sounding street may well have been the site of ‘a house of public convenience’ as Ekwall delicately puts it, one sentence after using the word Shiteburgh. The change to Sherborne, some time in the late 15th century, was to save the blushes of more genteel medieval folk. It is now just another forgettable narrow lane lined with modern offices, south of King William Street.

Dunghill Lane. Enough said, except to note that this is yet another name for the ghastly offal-plagued Pudding Lane, also known as Ratones Lane due to the preponderance of rats, discussed in Part One. It is probably the modern-day Gardner’s Lane.

→ Gardner’s Lane, cut off from the Thames by modern riverside development and with its cobbles in a poor state. It is now mercifully free of offal and dung, although I’m not so confident about the rats – particularly given the presence of an ambulance when I took this photo.

The modern visitor may feel short-changed:

Smalelane, predictably meaning ‘narrow lane’, must have been extremely narrow to be so-called given the stiff competition – see, for example, Fye Foot Lane below. Ekwall speculates that this is the modern day Old Fleet Lane, which is not wide but equally wouldn’t win any awards for narrowness.

Fye Foot Lane, was once only five feet wide at its southern end. This lane heads south from Queen Victoria Street which is, like the elderly queen it was named after, very wide indeed. Poor Fye Foot Lane is now partially a pedestrian bridge, but even at its narrowest is a good eight feet wide.

← The southern extremity of Fye Foot Lane, now majestically wide and considerably higher than it once was.

The City needs to resolve the question of the space between ‘Fye’ and ‘Foot’, as the northern and southern end nameplates disagree on the matter.

Pye Corner was the site of a tenement called Le Pye, probably from a previous inn at the sign of a magpie. So there isn’t, and never has been, a connection with pies despite the condemnation of gluttony there now (see Cock Lane above). Sorry.

Ivy Lane: Hopes of seeing ivy-clad cottages here in 2020 are woefully misplaced. Nowadays there is no ivy, no prebendary houses on which it once climbed, no booksellers who occupied this area for centuries – no Ivy Lane, in fact. It was lost in the Blitz and not reinstated. It was a continuation of the still extant but very short St Paul’s Alley, which runs by the side of the Chapter House of St Paul’s cathedral.

← St Paul’s Alley, 15 metres long, is through the gate to the right. Ivy Lane stretched beyond, through what is now Paternoster Square.

The 17th century gatehouse on the left, Temple Bar, is exceptionally well-traveled by the standards of such buildings. It moved from its original site on Fleet Street to a country estate in Hertfordshire, staying there more than a century before moving back to the smoke in 2004.

Lime Street: Where lime was sold. Unfortunately, this refers to unpleasant calcium hydroxide rather than pleasant citrus fruit, so it is just as well the lime sellers have been replaced by indifferent Victorian and modern architecture and the love-it-or-hate-it Lloyd’s of London building.

← Definitely not the origin of Lime Street’s name

→ Definitely the only building of interest on Lime Street now. The Lloyd’s of London building, Richard Rogers’ masterwork, is grade I listed.

Elbow Lane sadly did not involve elbows as it was a corruption of Old Bow Lane, although it did resemble an elbow in layout. It is now College Street, which these days has no college, and is close to Cannon Street which never had any connection to cannon whatsoever.

Cheapside. Ekwall spends three whole pages on what was once the main shopping street of the City of London, confirming (a) what many people already knew about ‘Cheap’ – that it refers to a market, or bargaining; and (b) there is little evidence to indicate what ‘side’ refers to. Ekwall can be really very irritating at times – I’ve achieved the same result in two short sentences.

← Cheapside, once the beating heart of London. The three shops to the left date from 1687, the tree arching over them was mentioned by Wordsworth, and legend has it that the bells of St Mary-le-Bow church, right, called on Dick Whittington to ‘turn again’ and return to London in the 14th century

Nearest Stations for the sites mentioned: