The Other Royal Home in the City 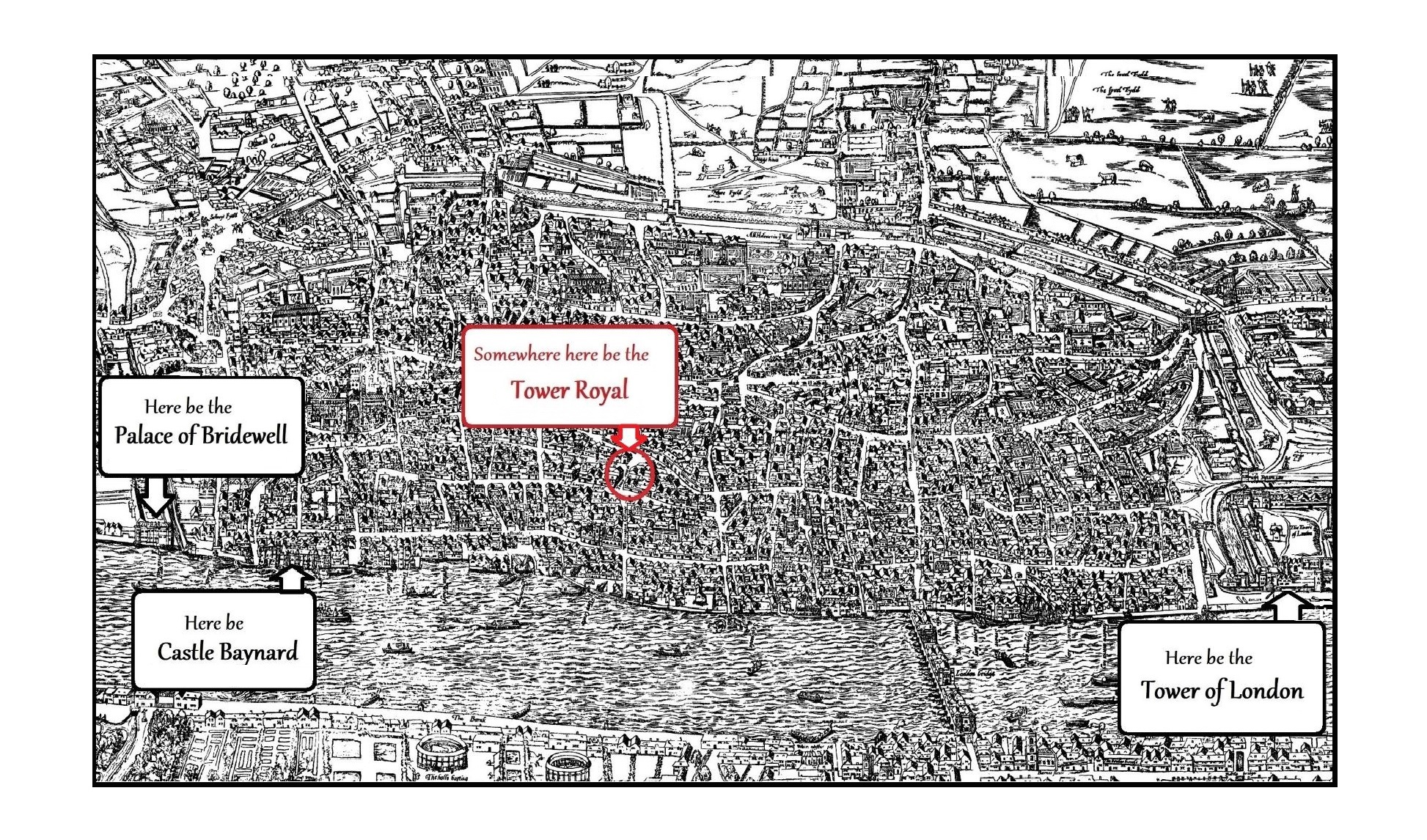 The Tower of London, the fortress protecting the City of London from attack in the east, is known around the world. Baynard’s Castle, a Norman fortress rebuilt as a medieval royal palace in the west of the square mile and lost in the Great Fire of 1666, is less well known but does at least have a ward (administrative district) of the City named after it. The nearby Palace of Bridewell is more famous as the prison it later became than the royal residence it so briefly was – but at least it can lay claim to being the setting for the celebrated Holbein painting The Ambassadors.

However, another home of Kings and Queens, the Tower Royal, has been well and truly forgotten by history. This smaller ‘des res’ in the heart of the City had a bit part in Wat Tyler’s rebellion and played host – fortunately at different times – to monarchs, dukes, a queen’s wardrobe and most, if not all, the King’s horses.

It was situated in the narrow streets of Vintry ward and met its end more than 350 years ago, so it is unsurprising that there are no surviving illustrations. With barely any written evidence either, it is all too predictable that historians – the handful who mention it – disagree as to its origins.

Wheatley places it in ancient Watling Street, the former Roman road that passes through the City. Other historians opt for the top end of College Hill – once called Tower Royal Lane, which to my mind is a definite clue. The two views aren’t necessarily inconsistent; it could have stood on or near the junction of College Hill, Budge Row and Watling Street. Either way, there can be no definitive ‘X marks the spot’ on the Agas map of London (top).

So what do we know?

First off, there is no evidence that it was significantly tower-like. Next, despite Stow’s claims, the designation ‘Royal’ probably wasn’t due to its royal connections at all, but rather from vintners – wine merchants – of La Riole near Bordeaux, who lived in the area and imported wine from their homeland. College Hill was also sometimes called La Riole, or variations thereof. The name survives today only in the church of St Michael Paternoster Royal, further down the street towards the Thames.

The Tower Royal might have had its origins as far back as the reign of King Henry I (r.1100-1135). Stow claims that King Stephen (r.1135-1154) lived there – presumably when not squabbling with cousin Matilda during that period known as ‘the Anarchy’ (or a ‘lax state of affairs’, as Sellar and Yeatman describe it in their satire of English history, 1066 and All That).

However, Wheatley is adamant that it was not built before the 13th century. Stow states further that towards the end of the reign of King Henry III (r.1216-1272) it was in the hands of one Thomas Bat, a citizen of London, and on his death passed to Simon de Beauvais, surgeon to King Edward I. At least all agree it existed by 1318, and by 1320 the name ‘Royal’ was justified, as it was possessed by King Edward III (r.1327-1377), who in 1331 gave it in turn to his wife Queen Philippa for her lifetime. Philippa enlarged it and based her wardrobe there, but had to pay compensation to one Maria de Beauvais – presumably a descendant of surgeon Simon – who had lost her home to make way for Philippa’s chemises, kirtles, tabards and mantles. After Philippa died in 1369 it passed to the Dean of Westminster, but by 1371 it was back in Royal hands and Joan, Princess of Wales, mother of the future Richard II, was living there.

It was while Joan was in occupation that it got its 15 minutes of fame. Or at least, 15 minutes of slightly less obscurity. In 1381, during the peasants’ revolt, the much-respected Joan, now a widow, was allowed safe conduct through the lines of Wat Tyler’s rebel army to return to the capital from Kent. She then fled from the Tower of London, which the rebels subsequently seized, to her home at the Tower Royal. Stow concludes that the tower ‘seemeth to haue beene at that time of good defence’, and that King Richard himself may also have lodged there at around this time. This suggests the building was of some size and solid structure.

After the killing of Tyler by Mayor William Walworth, and the subsequent suppression of the revolt, the King came to tell his mother at the Tower Royal,

‘where shee had remayned three dayes and two nightes, right sore abashed, but when shee saw the king her sonne, she was greatelie reioyced and saide. Ah sonne, what great sorrow haue I suffered for you this day. The king aunswered and saide, certainely Madam I know it well, but now reioyce, and thanke God, for I haue this day recouered mine heritage, and the Realme of England, which I had neare hand lost’ (Stow, p.246).

←Wat Tyler about to lose his head at the hands of Mayor Walworth.

Richard II looks on, his mind no doubt turning to thoughts of telling mum all about his day at the office.

Stow is convinced the King was still at the Tower Royal in 1385; but what was already a very patchy history then peters out almost completely for more than a century. Strype claims that King Richard III (r.1483-1485) granted it to the first Duke of Norfolk, but its moment in the sun had passed. For a period in the early 16th century it was used to stable the King’s horses. The Royal Mews, on the site of Trafalgar Square, began stabling horses when rebuilt following a 1534 fire, so stabling at the Tower Royal probably ended in that year. Prior to this the Royal Mews had held only falcons, its original function being to hold the royal hawks during moulting. ‘Mews’ is from the French muer – to moult.

In 1603 the Tower Royal was decrepit and divided into tenements, again according to Stow. At least this observation can be relied upon – Stow was living in London at the time. More worryingly, it implicitly recognises that commoners were lower down the social hierarchy than the King’s horses.

No matter; the building was in its final decades. Whatever remained of it was destroyed in the Great Fire and not rebuilt.

Nearest Station: Cannon Street. Although there is nothing of the Tower Royal to see now, the area is not without interest. Unfortunately most of the buildings that provide that interest are normally closed to the public. For example, Dowgate Hill presents an interesting streetscape of three Livery Halls in a row, plus there’s the Innholders’ Hall just around the corner, and the former Mercers School which is on the site of Dick Whittington’s last home. The church of St. Michael Paternoster Royal is more likely to be open, and the Thames Walk, London Mithraeum and the tiny Whittington Gardens are all within a few metres.