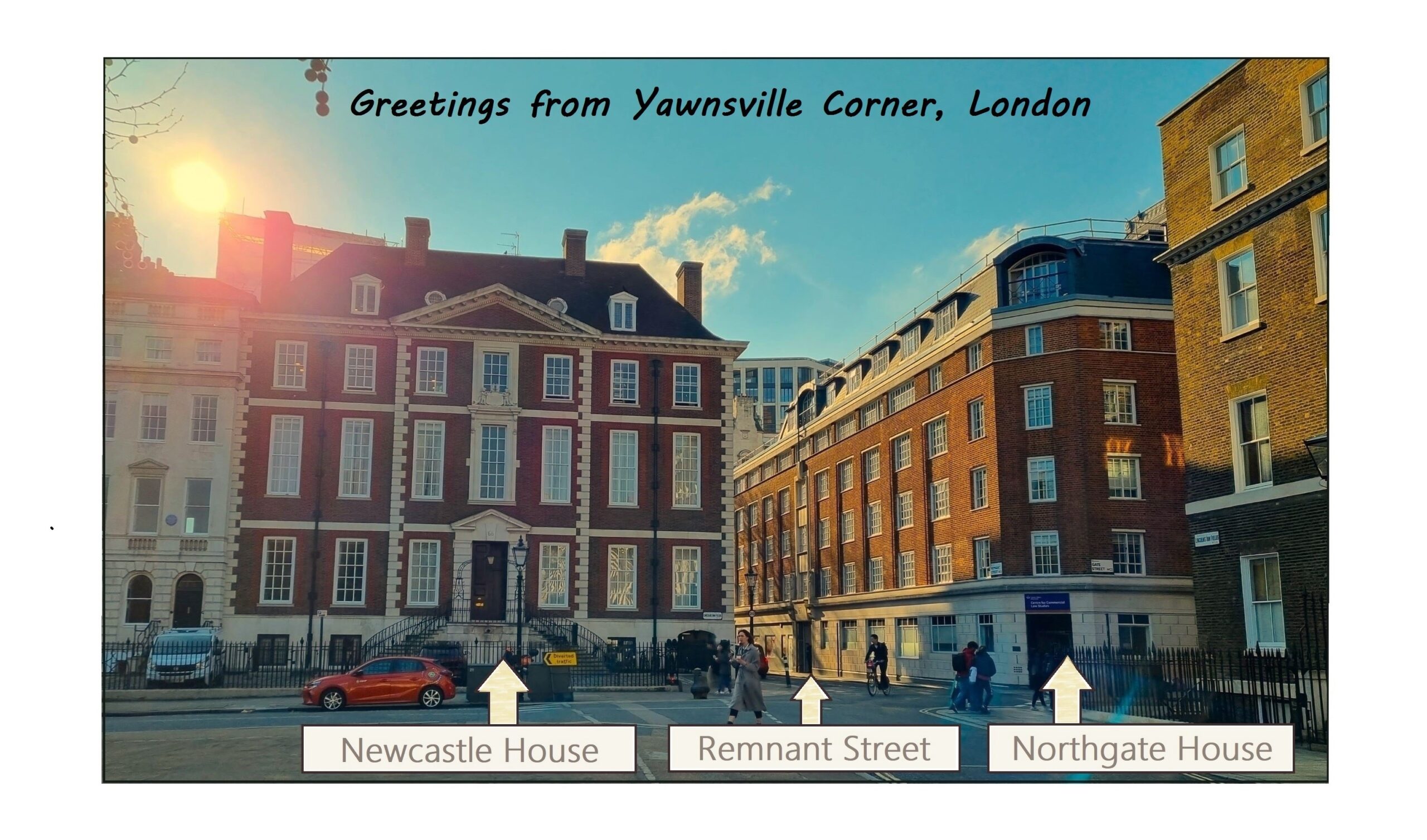 The London blogger is faced with a bewildering array of fascinating topics to chose from. But just for once, I thought, shouldn’t the apparently-boring take centre stage? Never mind well-known tales of murder, ghosts, drama and lost love, or stunning architecture; we should occasionally take time to appreciate streets or buildings which, on the surface, have no merit. So, prepare to leave admiring adjectives and purple prose behind, as I try to find something – anything – interesting about a randomly-selected 70-yard long road which on the face of it has zero blog-post potential.

Picture the scene: A dusty municipal London office, c.1902. A pair of town planners, let’s call them Edwin and Bert, are looking over the designs for the huge Kingsway-Aldwych road improvement scheme then under way, stretching between the Strand and High Holborn. Edwin notices that Great Queen Street has been cut in two by the pristine new Kingsway, leaving a tiny eastern rump, stranded between Kingsway and the venerable Lincoln’s Inn Fields. ‘What do we do with this, Bert?’ he asks. ‘What, that tiny remnant that’s no use to anyone?’ responds Bert. And so it was that Remnant Street was born. Bert went on to suggest that with Kingsway soon to provide easier access to West End theatres, they could get some practice in by taking in a show that evening – perhaps at the Gaiety, the Opera Comique, Globe or Olympic. ‘You do realise’, said Edwin quietly, ‘that the Kingsway scheme has bulldozed every last one of those?’

All about Lord Remnant

Okay, I admit the bit about naming Remnant Street is fiction – an attempt to be more interesting than the true explanation. In fact it stayed as a semi-detached part of Great Queen Street until 1935, when it was renamed after a dull peer, Lord Remnant (1862-1933), a lawyer at nearby Lincoln’s Inn. He was also Conservative MP for Holborn, a perennial back-bencher and member of a series of uninteresting committees. It gets worse; he made a habit of entering vegetable competitions – the acme of tedium to most city folk – at the Twyford and Ruscombe country show, held close to his country seat, Bear Place. Yet even in this endeavour he failed to shine: In 1923 he was runner-up in the ‘collection of 12 vegetables’ category, and also the pea, celery, carrot, potato (white round), potato (white kidney) and onion (spring sown) individual categories. Further ignominy followed with only a third place in runner beans, and he was unplaced in cauliflowers. Returning to London, the Remnants supposedly had long-standing connections with the parish of St. Giles-in-the-fields in which Remnant Street lies; indeed just north of it, Twyford Place was named after the town closest to Bear Place. But his lordship, James to his friends, was the last of his line with any direct link – a Remnant remnant, as it were. And with that tortured pun we say goodbye to James, his second-rate political career and his third-rate legumes.

What about Remnant Street before the Remnants?

Originally just called Queen Street when laid out in the 17th century, the whole thoroughfare from Lincoln’s Inn Fields to Drury Lane acquired the ‘Great’ epithet to differentiate it from Little Queen Street. This more modest road ran north to Holborn, but was lost under the monumental Kingsway at the turn of the 20th century. Queen Street was probably named after James I’s wife, Anne of Denmark, one of England’s less exciting consorts.

A number of famous and interesting people of the 17th and 18th centuries lived on Great Queen Street but none, it seems, at the eastern end. So, disappointingly, no blue plaques for modern-day Remnant Street.

A Tour of Remnant Street

Okay, my quest isn’t going well so far, but I suggest we go on a hypothetical walking tour. Not a very long one – the walking will only take about 90 seconds.

At around the time our 70-yard rump was acquiring its present name, Northgate House was being built, taking up the entire north side. Damaged in the Blitz but repaired, it is an unimaginative, vaguely neo-classical structure, mainly brick but with a stonework façade to Kingsway. Northgate House was soon occupied by enterprises entirely appropriate to such a dull building: HM Customs and Excise, the Westbourne Park Building Society and a branch of the Post Office.

There is little exciting about building societies. Lucky then for sensation-seekers with a taste for baked comestibles that Greggs has recently taken over the building society premises. Greggs is famous for launching a vegan sausage roll in 2019 which, according to the BBC, ’caused an immediate sensation’. This branch also has exceptionally long business hours, opening at 6:30am every weekday for early commuters. However, in my search for interesting facts I feel I may be clutching at cheese straws here; and this part of Northgate House is officially 60 Kingsway, so doesn’t even count as Remnant Street.

→ Those with a fascination for pasties must accept that, interesting though it may be, this branch of Greggs is on Kingsway.

The Post Office was one of only two establishments that seem ever to have claimed Remnant Street as their address, although admittedly ‘Kingsway’ had to be tacked on the end to give customers any hope of finding it. The establishment was described as a ‘model post office’, apparently used as a guinea pig for new processes and technology.

In 1959, the Illustrated London News reported on new self-service machines which, with the insertion of a threepenny bit, would vend stamps, a stamped envelope or stamped letter card. These machines, designed to reduce queues at the counters, lasted a few years – I can remember examples, mostly out of service, attached to pillar boxes in my home town. Galloping inflation in the 1970s probably rendered them impractical.

Rather more successful was a biker in full black leathers and black scarf, who in 1964 robbed the post office of £240 – £5,000 in today’s terms – in a daring 4pm raid. Frederick Long, the assistant manager, was shot in the chest after telling the robber ‘don’t be silly’ , confirming my long-held belief that middle-class condescension rarely works pitted against a handgun. A post office van, attempting to stop the robber’s escape, rammed him causing the bike to overturn but he merely got back on and made good his escape through the alleyways around Lincoln’s Inn Fields. He was ‘riding like a film stuntman’ according to a stunned witness. Post Offices rarely get more exciting than this. Thankfully, Mr Long made a full recovery; I can find no record of the thief being caught.

The former post office and tax offices are now occupied by the Queen Mary University of London commercial law department, which provides no interesting tales whatsoever. The building is known as 67-69 Lincoln’s Inn Fields, and recent refurbishment has seen a very bold number 67 placed above its main entrance. Poor Remnant Street no longer has a single postal address to its name. This entrance still has, on either side, quite interesting statues depicting Saints Anselm & Cecilia, to whom the adjacent catholic church is dedicated.

The former post office and tax offices are now occupied by the Queen Mary University of London commercial law department, which provides no interesting tales whatsoever. The building is known as 67-69 Lincoln’s Inn Fields, and recent refurbishment has seen a very bold number 67 placed above its main entrance. Poor Remnant Street no longer has a single postal address to its name. This entrance still has, on either side, quite interesting statues depicting Saints Anselm & Cecilia, to whom the adjacent catholic church is dedicated.

→ Statues of Saints. Perhaps there was originally access to the church through this entrance. Anselm was Archbishop of Canterbury 1093-1109. The church is the successor to the nearby Sardinian Embassy Chapel, dedicated to the same saints and demolished in 1909.

We now move on to the south side of the street to admire a side wall of Newcastle House. Parts of this impressive building date from the late 17th century, although the east and north walls are 1930s Edwin Lutyens reconstructions of unsafe Christopher Wren originals. The Earl of Powis, rebuilding after a fire destroyed the previous structure in 1684, obtained an Act of Parliament authorising him to extend the new house by erecting rooms on pillars over what was then Queen Street. The result is a public brick-arched arcade at ground floor level beneath the north flank – a very unusual arrangement in London. Pedants might argue that as part of Newcastle House, the passageway is not in Remnant Street at all, but as my quest is proving so difficult, the pedants can go take a running jump.

Stop 4: Imperial Buildings and links to a war-time tragedy

The final structure with a footprint on Remnant Street is Imperial Buildings (1914), an unimpressive late attempt at Edwardian Baroque, faced in Portland stone, keeping its best side for Kingsway. However, there is a side door which for many years was the entrance to a café / sandwich bar, numbered 2 Remnant Street. By 1937 this was in the hands of Carlo Capitelli, an Italian born in 1899. Interned during the Second World War, he was on board the SS Arandora Star being taken to Canada when it was torpedoed in July 1940. Capitelli was lost along with 804 other internees, prisoners-of-war and crew. For more than 30 years his widow Teresa continued to run the café. She died at home in Long Acre, a few minutes’ walk away, in 1974. 2 Remnant Street is now an exit from a large All Bar One, which like Greggs uses a Kingsway address.

← Users of the Newcastle House passageway emerge into Remnant Street next to the side door of Imperial Buildings, formerly the entrance to Sig. Capitelli’s café.

There is a memorial to the Italians who lost their lives on the Arandora Star at St Peter’s Italian Church in Hatton Garden.

Conclusion: Remnant Street isn’t quite so dull after all

It turned out to be a tough ask, but ultimately all roads, it seems, have stories to tell. Remnant Street may not seem interesting on the surface, and even beneath the surface is not all that exciting, but even this short stretch of tarmac has witnessed an impressive robbery straight from a film set, been impacted by an infamous tragedy, and shows the joint efforts of two world-famous architects separated by 250 years.

I will concede, however, that a ‘Highlights of Remnant Street’ tour is not a serious commercial proposition.