The Shady World of Willy Clarkson 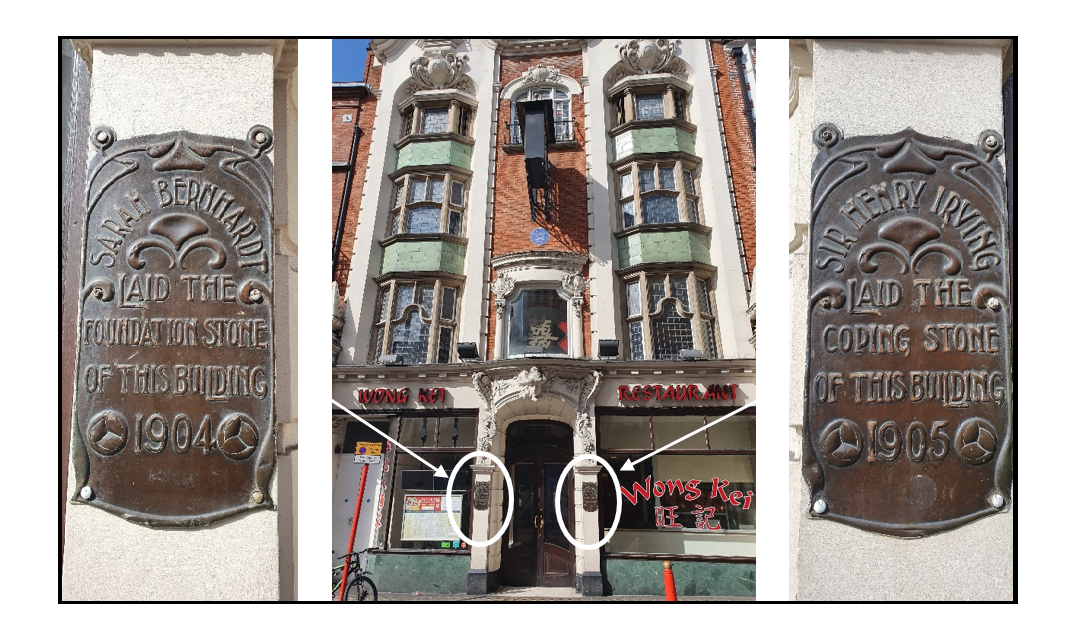 What stories can lie behind a simple blue plaque? … Prepare to enter a murky world of blackmail, fraud and wig-making.

An London County Council (‘LCC’) blue plaque of 1966 vintage is fixed high up on the decorative, theatrical façade of 41-43, Wardour Street in Chinatown. The ground and first floors are occupied by a Chinese restaurant, reputedly with the rudest staff in London. The Historic England listing describes the façade as ‘elaborate’ and ‘free style Jacobethan’ although I prefer ‘confused bombastic’. On either side of the front door are ornamental brass cartouches commemorating the laying of the foundation and coping stones by famous actors of the day. Passers-by regarding this scene may conclude that Willy Clarkson of Clarkson’s, Costumier and Perruquier (wig-maker) was both famous and respectable.

→ The impeccably respectable LCC plaque suggests Clarkson is only memorable for his wig-making. Most historians beg to differ.

Famous, yes. Respectable? That’s moot. The company seems respectable enough: Started in 1833 by his father as a supplier of wigs to the legal profession, it branched out into the theatre, adding props, costumes and makeup to its offerings, and was inherited by Willy in 1878. It acquired a royal warrant and the opulent new premises in Wardour Street opened in 1905. Willy died in 1934 and the company closed c.1940.

→ Clarkson towards the end of his life. His company did not long outlive him.

Yet take a look at the man behind the company and things look rather different.

Those cartouches, for example. It’s true that ‘Sarah Bernhardt Laid The Foundation Stone Of This Building 1904’, as the one on the left states – probably due to a guilty conscience as throughout their long ‘friendship’ Bernhardt treated Clarkson as a lackey, once demanding he accompany a cat on a trip from London to Paris. However, ArthurLloyd – an online goldmine of theatre information – doubts the right-hand claim that ‘Sir Henry Irving Laid The Coping Stone Of This Building 1905’. Irving was by 1905 a sick man, rarely in London and in the final months of his life. There is no record of an unveiling; perhaps Clarkson just put up the pre-prepared cartouche anyway.

We can forgive him that – it looks to be an expensive item. So, we’ll move on to Clarkson’s semi-detached relationship with the legal niceties of the age.

For one, there was his attitude to women workers, again reported by ArthurLloyd. He pleaded guilty in 1898 to illegally employing women in a factory on a Sunday. Female employees were discovered working on the day of rest (Boxing Day, no less), due to the impending panto season. From the extract of the court case published in the 29th January 1898 edition of the Era, it is clear that the judge bent over backwards to emphasise mitigating circumstances. Clarkson was fined just 12s, although he had to pay costs of £3 9s, 6d.

If that seems small potatoes, we should move on to insurance fraud. Perusing Clarkson-related insurance company records would suggest that wig-making companies are very susceptible to fire damage. However, it would be more correct to say that Clarkson’s was susceptible to arson, his fire-related claims almost reaching double figures. After his death, several insurers successfully sued his estate for the return of payouts (Hutton, 2012).

Not disreputable enough for you? How about victim of blackmail? Harry Greenwall, Clarkson’s friend and biographer, mentions in ‘The Strange Life of Willy Clarkson’ (1936) his broken engagement, his ‘effeminacy’, his ‘sexual kink’ and his ‘high-pitched lisping voice.’ Okay, so you can see where this is going. There are claims that a lavatory in nearby Dansey Place was called ‘Clarkson’s Cottage’ (Hutton, 2012), but I’m not convinced that proves much, given the flamboyant frontage of 41-43, Wardour Street was the most memorable building nearby. I will concede that, as he may also have had assistance in the arson attacks, and a convicted blackmailer was later found guilty of forging Clarkson’s will, there is more than enough material to support Greenwall’s assertion that in his final weeks Clarkson was indeed the victim of blackmail.

← Time was running out for Clarkson by the early 1930s, but the clock on his premises to this day commands a view of Wardour Street

Next: His murder. Perhaps. Possibly. Maybe. Greenwall writes that Clarkson was discovered in his nightshirt with a gash in his forehead from which he never recovered; a diamond ring and diamond collar stud were missing along with £250 in notes and gold. This does seem to point to foul play of some sort, although an inquest proved inconclusive. We’ll never know the true circumstances.

Next: Being Jack the Ripper. Yes, Willy Clarkson has recently been wheeled out as a suspect, but the proposal is in my opinion balderdash. The only concrete link is a Clarkson wig, found near the fourth victim – at a time when the Clarkson firm was providing thousands of wigs a year to theatres and members of the public. The related 30 minute documentary will I’m sure find a ready audience among Ripper obsessives, but personally I’m not giving this particular threat to Clarkson’s dubious respectability the time of day.

Greenwall wrote of: ‘… the number of sensational lawsuits arising from the death of Willy Clarkson and from certain events which preceded his death’ and continued ‘I am making no attempt to defend the reputation of a dead man, but I am trying to picture a very colourful personage who, for so many years, was a prominent figure in London life. His life and his death were indeed strange, and I will leave it at that.’

So will I. Greenwall’s book is 282 pages of anecdotes and gossip – some about Clarkson, some that Clarkson had been told and related to the author in turn: From his friendship with Bernhardt to his central position in late nineteenth century ‘Bohemian’ society in both London and Paris; taking measurements of a circus lion to make a new mane so it looked sufficiently ferocious, and unwittingly providing the disguise Dr. Crippen used to flee to America. It is a very entertaining read. How much of it is true is anyone’s guess.