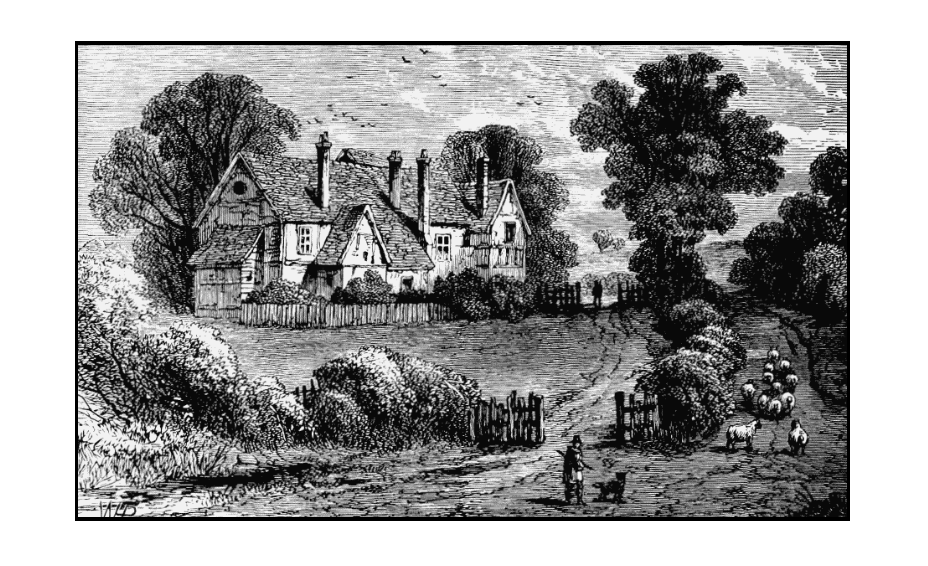 Many readers will know of the magnificent Banqueting House on Whitehall, but the metropolis once had another of these buildings. Long-lost, long-forgotten and rather more homely, the Lord Mayor’s banqueting house stood for almost 200 years in an idyllic rural setting on Tyburn Road, by the river of the same name, in the county of Middlesex. The site is now home to Stratford Place, an oasis of calm on the far-from-idyllic and very urban Oxford Street.

The building’s origins lay in the use of the area’s springs and river, known locally as the Aye Brook, to supply fresh water to Cornhill in the City of London, more than two miles to the east. The City had obtained a lease on the Tyburn land in 1236 and work on the conduit commenced two years later, paid for by merchants of Picardy in France, in return for the right to land and warehouse woad and other goods in the City. More pumps using Tyburn water were erected in the City in the late 15th century, supplying water for, it was stated at the time, ‘the poor to drink and the rich to dress their meat’.

The City relied on this water source, so its leaders took a hands on approach to protecting its interests. A tradition emerged that, on the 18th of September each year, there would be a ceremonial inspection of the water supply at Tyburn by the Lord Mayor, Aldermen and Masters of the great twelve livery companies, all on horseback, accompanied by WAGs in wagons. One drawback to this tradition was the lack of decent dining facilities in the area, so the Court of Aldermen decided to provide their own, ordering the City Chamberlain to build, at the City’s expense, ‘a good hansom room … for the receipt of the Lord Mayor and Aldermen and their company at the time of their yearly visitation’. Completed in 1553, the banqueting house, as it became known, was built over two cisterns by the north eastern corner of the bridge that carried Tyburn Road over the Aye Brook.

The historian John Strype (1643-1737) describes the visitation of 1562, during the mayoralty of Sir William Harpur (1496-1574): Before dinner the party, including the Masters and Wardens of the great livery companies, went hunting and managed to kill a hare, and after their banquet went out again and killed a fox, to much ‘hollaring and blowing of horns’. It’s strange that the successful hunting of a single hare and fox by sixty men was an achievement worthy of such a hullaballoo, but it does emphasise the rural nature of the area at the time.

→ The dining facility at Tyburn pre-dated this, the rather more famous Banqueting House on Whitehall, first built by King James I in 1609 and rebuilt seven years later to the designs of Inigo Jones after a fire.

Londoners were familiar enough with the Tyburn building for it to be name-checked in the final act of The Devil is an Ass, Ben Jonson’s mediocre follow-up to his hit play Bartholomew Fair. Ambler, the gentleman usher of Lady Tailbush, is robbed of his clothes by a devil as he enjoys an assignation by the banqueting house with an unnamed prostitute. The play was first performed in 1616 by the King’s Company at the Blackfriars Theatre, but even as Messrs Burbage and Condell strutted their hour upon that particular stage, the banqueting house was in danger of facing its own final curtain. Times, and water supplies, change; in 1613 the New River opened, supplying fresh water to the City from the River Lea through Islington. Surplus to requirements, the water supply at Tyburn was eventually let by the City for a cool and refreshing annual income of £700. The house lost its original purpose and went into decline.

It enjoyed a brief renaissance at the restoration of Charles II in 1660, hosting official visits and other events – enough to merit significant expenditure on repairs to the roof and ‘great room’, the stables, doors and windows. The City Chamberlain organised events, and his record of the food consumed at a banquet in 1674 has survived. Appearing on the table were, among various poultry, meat and fish: Two bucks, six shoulders of venison, three dishes of pigeon pies, five dishes of meat pies, four hams, eight dried tongues, four large salads, eight dishes of fruit, eight dishes of custard, and four ‘rocks of snow creams and sillabubs.’ The bill came to £123 – over £16,000 in today’s terms. The food was supplied by a Mr. Pead and his invoice was not paid until December of the following year, by which time he was probably Pead-Off.

After its brief revival, the building fell out of favour again. This may have been due, at least partly, to the construction of the first official residence of the Lord Mayor, in what is now Groveland Court near St. Mary-le-Bow church in the heart of the City. Hunting opportunities must also have dwindled somewhat, as urban London rushed towards Tyburn at breakneck speed.

← The ‘Morden and Lea’ map of 1700, with the banqueting house indicated to the west. Urban sprawl has already engulfed Soho to the east

← The ‘Overton’ map, showing the same area twenty years later. Development has reached Bond Street and the area to the bottom left is about to be laid out with Grovesner Square at its centre.

When the banqueting house was demolished just seventeen years later, the site was pretty much surrounded by buildings.

The final nail in the coffin was a troublesome tenant. Step forward the Clerk of the City Works, the official in charge of maintaining the structure, who seemed to view it as his own private domain. In the early 18th century the holder of the office, Isaac Olley, let the building to one William Wyebridge for his own profit. The City took legal action to eject Olley and Wyebridge, but both men died in 1724 before the conclusion of the case; the City authorities promptly erected railings around the site. Upon inspection, the vacated property was discovered to be in ‘very indifferent repair.’ Worse was to come a decade later, when it was discovered that a large part of it had been stolen, the rest left ruinous. By this time, plans were well under way for the Lord Mayor’s new official residence, Mansion House, with its magnificent Egyptian Hall tailor-made for banquets, so there was little point in rebuilding. A contractor was employed to demolish what remained, the City receiving £18 for salvaged materials. The demolition marked the ‘end of Corporation feasting and junketing west of Temple Bar’ as one journalist later put it.

By the mid-18th century the City had realised that the land was worth more as a development opportunity than as pasture, and proposals were formulated by George Dance the Younger, the City Surveyor, in 1770. Edward Stratford, later the second Earl of Aldborough, was looking for a site to build a London residence, and Dance’s plans may have been amended by Richard Edwin, an obscure Marylebone architect, at his invitation. The resulting development is unique in London: Stratford Place was a cul-de-sac of superior Georgian townhouses, many of which still survive, culminating in a grand mansion, Stratford House, completed in its original form c.1777 and known in the early 20th century as Derby House. It has been occupied by a London gentlemen’s club, the Oriental, since 1954.

Strangely, the 1737 demolition was not the last heard of the banqueting house. In 1875, during gas main repairs, the St. Marylebone vestry (council) discovered a large subterranean building, buried near the entrance to Stratford Place, and publicly announced that it was the vast ruined basement of the Lord Mayor’s structure. It was also mentioned in newspaper articles when, on 11th September 1916, Lyon’s opened its Maison Lyons on Oxford Street, behind the west side of Stratford Place, occupying part of the banqueting house site. This, however, provided an altogether more spectacular experience than its predecessor, being seven stories high and faced in white Carrara marble. Lyon’s promoted it as a ‘Super-Cafe’, spread over four floors and with a 9-piece female orchestra, ragtime sextet, a tenor singing at dinner, space for 1,000 diners, and long opening hours. On the ground floor was a huge confectionary and patisserie – ‘the largest in Europe!’ claimed Lyon’s newspaper advertisements.

← The former Maison Lyons on Oxford Street, occupied by H&M in 2018 with altered ground and first floors.

And with that, the Lord Mayor’s banqueting house drifted into obscurity, although Ethel Bright Ashford (1883-1980) – one of the first female barristers, councillor and member of the St. Marylebone Society – wrote on the subject in the late 1960s. Her research convinced her that there were no surviving contemporary images; surviving descriptions had been used to produce the image at the top of this post in Victorian times, an artist’s impression of how it appeared c.1690. This makes two paintings held in the Royal Collection, claiming to show views of the building as it appeared in 1730, seem a tad suspicious. They are dated 18th century, and attributed only as English school – artist unknown. They show a very impressive, well-maintained building wholly inconsistent with the later artist’s impression, and at a time when the City acknowledged it was actually in a state of disrepair, if not already derelict and partially half-inched.

The explanation lies in the paintings’ more modern description, which includes the words ‘ … later Derby House’. The artist, no doubt painting in the late 18th century, must have believed that the new mansion standing on the site, then called Stratford House, was an adaptation of the earlier building. It wasn’t, so the paintings are a complete fiction. They can be viewed here.

→ Stratford Place today, with the classical frontage of Stratford House – heavily altered at the end of the 19th century – in the distance. The brick-fronted building centre-left is number 21, on the approximate site of the banqueting house according to Ethel Bright Ashford. The rear of 21 is adjacent to the rear of the former Maison Lyons.

The land was known, until the early 20th century, as the Lord Mayor’s Banqueting House Estate. It was as part of this estate that in 1895 the lease of 21 Stratford Place was marketed in the Evening Standard. This advertisement also revealed the City’s financial misjudgement: The leases had been granted, renewable in perpetuity, with a ground rent less than £30 p.a. The City authorities went on to sell most of the almost-worthless freeholds to the leasees between 1930 and 1941, severing a 700-year-old connection with the site.