The Gaiety Theatre and the ‘Orchid Girl’ who never was 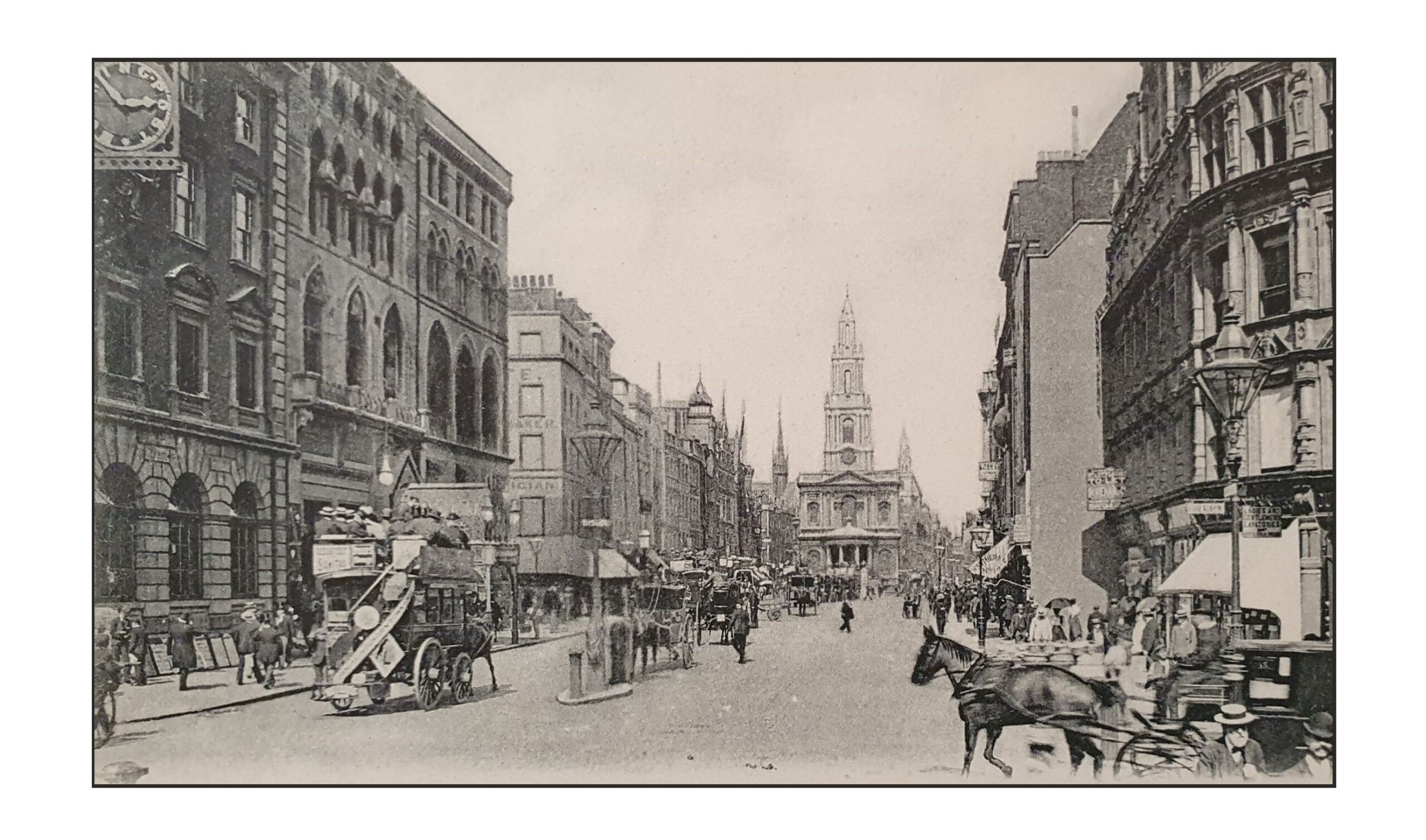 Browsing some London-themed websites, I was intrigued by a Londonist post titled ‘London Plaques with Awkward Errors‘, and found the deliberate misspelling of Michael Palin as ‘Pallin’ – by request of John Cleese – on a paving slab in the courtyard of Shakespeare’s Globe highly amusing. However, the article failed to mention my favourite inaccurate plaque, which managed to include not one, nor even two, but three errors. Allow me to explain.

The Gaiety Theatre, in an era when that moniker promised ‘merry and bright’ shows, was a popular venue on the Strand. Built in 1863, this first incarnation is shown in the featured picture, which dates from around 1900 – the Gaiety is second left, partly obscured by an omnibus. It fell victim in 1903 to the road improvement scheme that created Aldwych and Kingsway. An eye-catching replacement was built in a prime spot on a corner of Aldwych. This second theatre became known for musical comedy.

Each production typically involved an attractive chorus line and the lead females marrying aristocrats both on and off the stage. For example, in ‘Our Miss Gibbs‘ (1909) Mary Gibbs – a down-to-earth Yorkshire lass new to London – dates a humble bank clerk who, it turns out, is the son of Lord Eynsford. What were the odds? After many adventures and songs, Miss Gibbs duly marries said aristo, much as the actress playing her, Gertie Miller, married the 2nd Earl of Dudley.

← Almost the same view as the featured picture, taken a decade later. ‘Our Miss Gibbs’ is the current production

The Gaiety was successful but, just as in the shows that made it popular, there was a stage villain ready to threaten the heroine: The London County Council. Not content with the destruction its Aldwych scheme had wrought 35 years earlier, the LCC hatched a plan to create a large approach road north of the rebuilt Waterloo Bridge, involving the demolition of buildings including the Gaiety and the even more famous Lyceum. It quickly snapped up the freeholds, but had a slight problem acquiring the lease of the Gaiety.

Solution? What seems suspiciously like abuse of power. To get its entertainment license renewed, the LCC insisted the Gaiety required a wholly uneconomic programme of works to improve safety. Result: the premature closure of ‘Running Riot‘ in early 1939 and the stripping of internal fittings.

Then, the Second World War intervened and the whole plan was dropped – but it was too late for the Gaiety. While the Lyceum hadn’t had onerous safety requirements slapped on it, and hadn’t lost its fittings, any attempt to reopen the now bomb-damaged Gaiety post-1945 was doomed from the start. London stage actor Lupino Lane tried and almost bankrupted himself. It was finally demolished in 1957.

The replacement office block, ‘English Electric House’, HQ of the aeronautical engineering firm, was opened in 1960, and a large plaque commemorating the Gaiety was placed on the building. It stated:

On this site stood the Gaiety Theatre built in 1903 from designs by Richard Norman Shaw for impresario George Edwardes. The theatre opened with the performance of ‘The Orchid Girl’ and until it was closed in 1938 remained the home of musical comedy and one of London’s most famous playhouses

This must have been composed by an aeronautical engineer rather than a theatre historian, because: (a) Although many Gaiety productions featured ‘Girl’ in the title, the opening production didn’t – it was ‘The Orchid’; (b) Norman Shaw didn’t have a significant hand in the design. Although he held a watching brief over the entire Aldwych scheme, the architects appointed to the Gaiety development were from Ernest Rüntz & Co., and (c) the last performance of Running Riot was on 25th February 1939.

Three factual errors in 50 words takes some beating. Fortunately, a strongly worded letter was sent forthwith to the editor of The Daily Telegraph. Unfortunately, this resulted in the creation of a replacement plaque which, although correctly naming ‘The Orchid’, gave up on the architectural question altogether and still insisted the theatre closed in 1938. This time no one was willing to fund a new plaque, leading to a bodged alteration.

In time, English Electric House became the London HQ of Citicorp, and then had its own date with the wreckers ball. There is now a hotel and apartment block on the site, with a design clearly inspired by the long gone theatre. The plaque was rescued and attached to the hotel.

← The ME Hotel, the current occupant of the site, with the plane trees planted 120 years ago

It might have been easier for everyone if the theatre had been left standing.